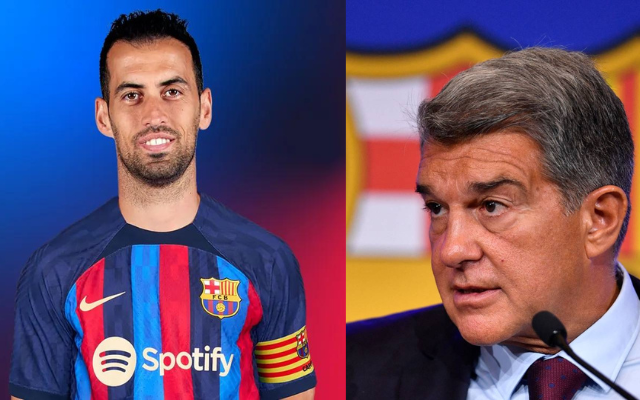 The Barcelona captain Sergio Busquets’ current deal will not be renewed at the conclusion of the current campaign, hence it is anticipated that he will leave the club during the summer of 2023, barring any late-breaking developments.

The 34-year-old player has been a constant at the club for close to 15 years, during which time he has seen a great deal of success. However, given the current state of affairs, it seems that he will be leaving the club he played for as a child in a little less than a year.

David Beckham’s Inter Miami FC has been mentioned as a possible destination for Busquets should he decide to make the switch to Major League Soccer (MLS). Should he decide to depart, the Spaniard will leave a significant hole for Barcelona to fill in the center of the park.

And if you believe the information provided by MARCA, Barcelona already has its eyes set on two potential candidates to replace Busquets when his contract expires in the summer of 2023. Ruben Neves, who plays for Wolves, and Martin Zubimendi, who plays for Real Sociedad, are two names that the Catalan heavyweights are contemplating.

Neves has been on Barcelona’s radar for some time now, and there were rumors that the Catalan club was interested in the Portuguese midfielder even during the transfer window that just closed. Despite this, he remained with the Wolves and proceeded to demonstrate his amazing abilities.

What are the options to replace Sergio Busquets?

When it comes to Zubimendi, he has made significant strides forward at Real Sociedad ever since becoming a first-team regular in the 2020/21 season. Even though his current market value is estimated to be at around €40 million, the young midfielder has a large release clause in the amount of €60 million.

The most important factor that will determine whether or not Barcelona go for him over the next summer is whether or not La Real is ready to negotiate a lower price for him.

Neves is represented by Jorge Mendes, who has a very excellent connection with Joan Laporta, the president of Barcelona’s club, and who might provide Barcelona an edge in their pursuit of Neves. However, since there is no release clause in his contract, Wolves have the ability to ask for a significant transfer price for him.

Frenkie de Jong and Nico Gonzalez are two players that are currently under contract with Barcelona and might be considered as potential replacements for Sergio Busquets. The first player has performed well every time he has been asked to play in the pivot position this season, while the second player, who is now on loan at Valencia, has been mentioned for a long time as the player who will eventually take over from the captain.

Therefore, it will be intriguing to watch what plan Barcelona decides to pursue next year in order to replace their long-serving midfielder with a new player.