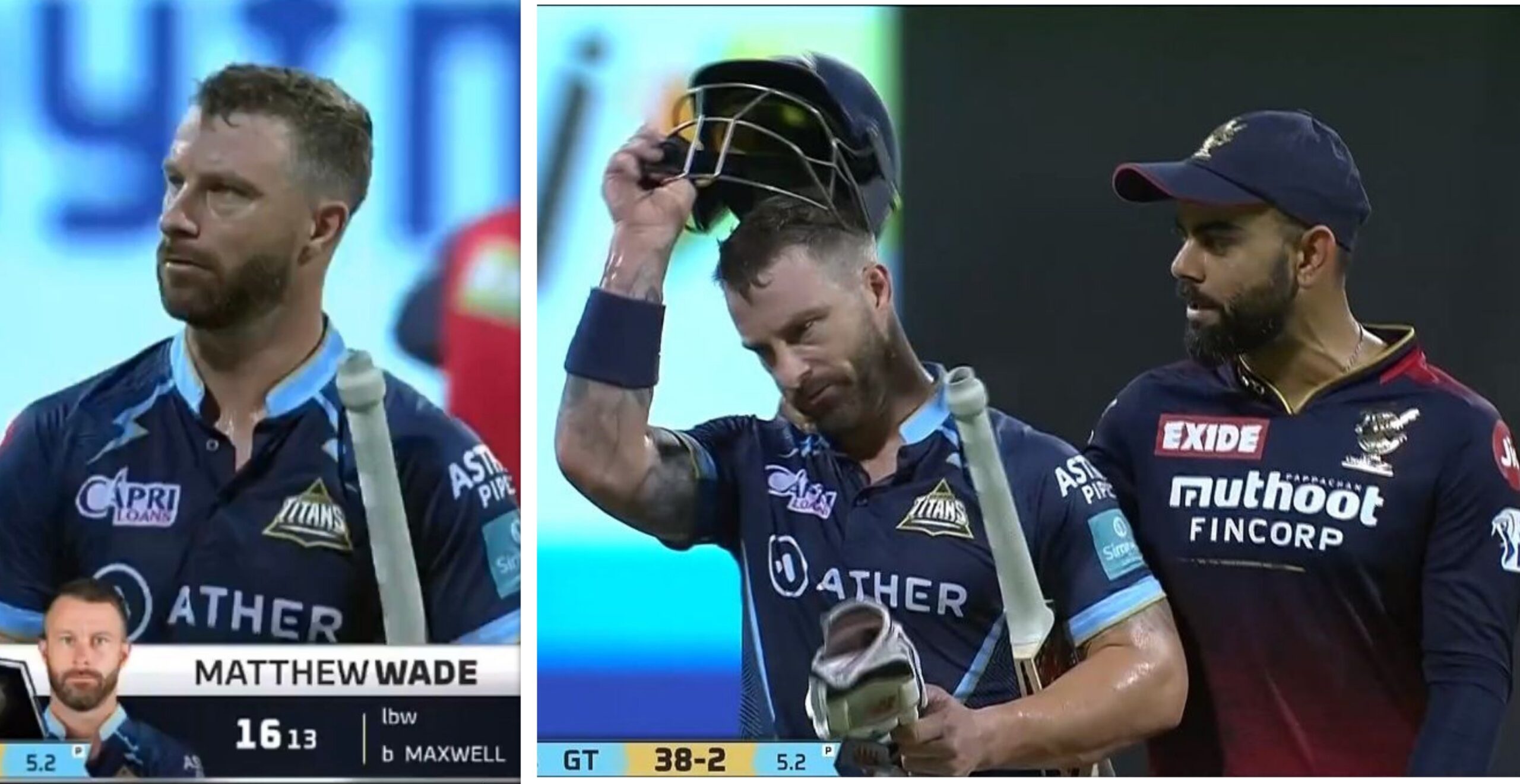 Matthew Wade was furious at his dismissal in the sixth over during his side the Gujarat Titans’ game against Royal Challengers Bangalore on Thursday.  After he was controversially adjudicated out after scoring 16 from 13 balls, he showed visible displeasure with the decision while walking off the field as well as in the dressing room. Gt eventually set RCB a total of 169 after electing to bat first.

Aside from two big overs at the hands of Wriddhiman Saha and Wade himself, GT’s powerplay didn’t fetch a lot of runs. After Saha slammed 14 runs off Siddharth Kaul in the opening over, Shubman Gill fell for 1 in the third over trying to poke at a probing delivery outside off from Josh Hazelwood.

The next over brought only two runs, and GT were trudging along at 23-1 at the end of four overs before Wade let loose against Hazelwood, smacking two fours and a six in an over that went for 15 runs. A few balls later however Glenn Maxwell sent down a length ball on the stumps that Wade tried to reverse sweep, but it struck him dead centre on the pad.

The umpire upheld the vociferous appeal, and Wade reviewed immediately signaling there was contact with bat. But Ultra edge showed no sign of it, and the ball tracker had it hitting middle stump so the on-field decision was upheld. Wade was beside himself; he slammed his bat on the way back and even Virat Kohli found a brief moment of empathy for the unfortunate batter. When he got upstairs, he was seen flinging his helmet across the dressing room, before slamming his bat against something. Later the slow-motion replays showed the ball changing course after passing the glove, but somehow it wasn’t detected by the technology.

Matthew Wade is disappointed about getting out or embarrassed about telling everyone that he hit it? #IPL

Matthew Wade is throwing Vade all over dressing room

What kind of behaviour was that for Matthew Wade?? #RCBvsGT #IPL2022

Matthew Wade's dismissal is clear example of LAZY UMPIRING and just technology cannot be trusted you have to look at all the angles and then decide if it was out. These umpires sit in an air conditioned room with all tech/angles and still give these fuckall decisions. #GTvsRCB

‘Stoinis saved KL Rahul from facing a lot of criticism’ – Twitter has mixed reaction to LSG skipper’s fifty
‘Batting at No. 4 has curbed his natural instincts’ – Hardik Pandya hits 50 but Twitter disappointed with slow strike-rate