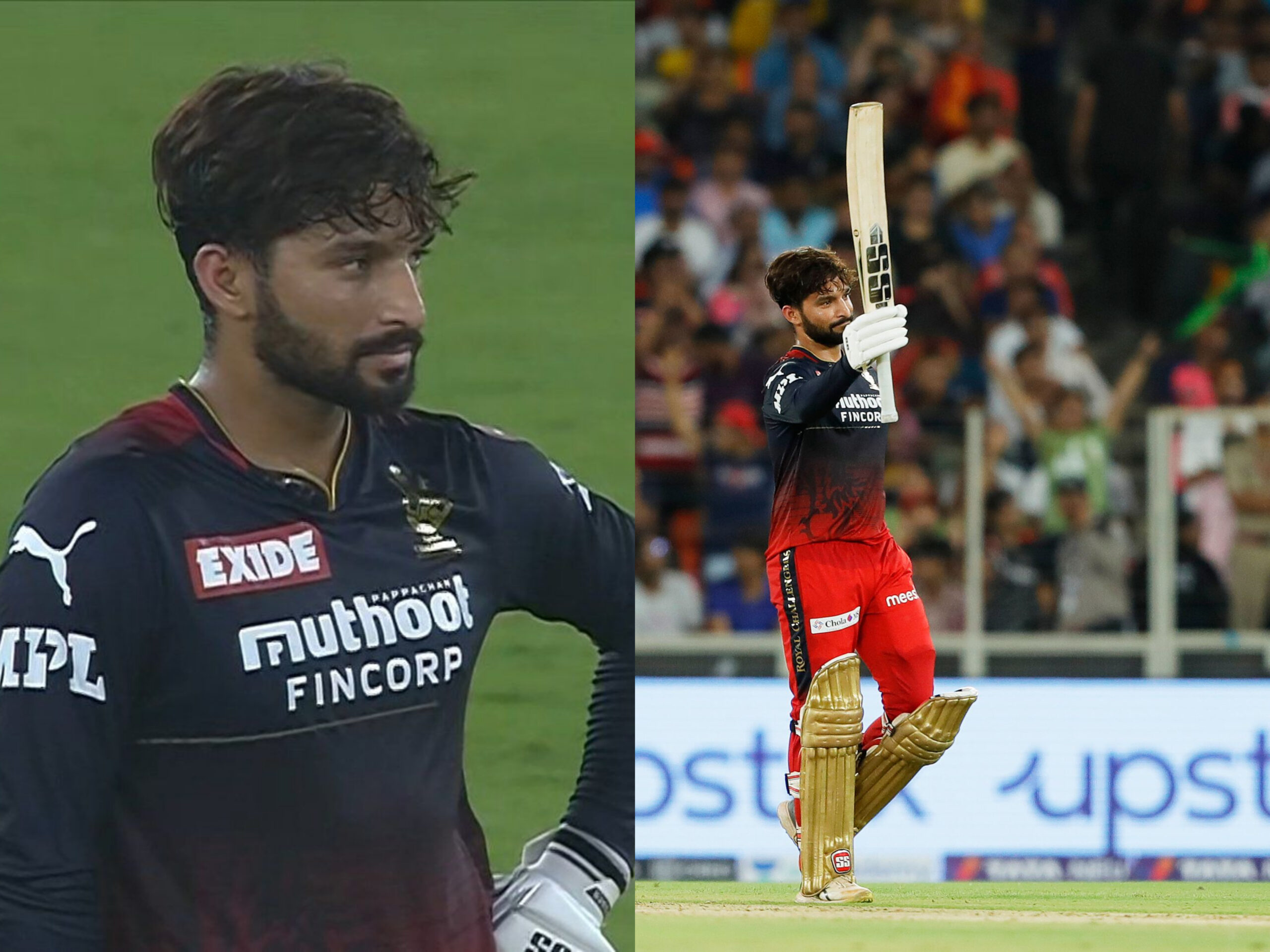 Rajat Patidar was outstanding for the Royal Challengers Bangalore, in the second IPL Qualifier against Rajasthan Royals. He hit his second consecutive half-century, scoring 58 off 42 balls at a strike-rate of 138. Four fours and three sixes featured in his pivotal knock. Patidar’s innings was instrumental in helping RCB post a total of 157 after being sent to bat first.

Rajat Patidar becomes the 3rd player in history after Suresh Raina and Kane Williamson to score 50+ scores in both Eliminator and Qualifier 2 of an IPL season.

Patidar arrived early at the crease, after Virat Kohli fell for 7 in the second over of the powerplay. He pieced together a 70-run partnership with skipper Faf du Plessis.

A bit of luck aided Patidar; he was dropped on 13(12) by Riyan Parag on the last over of the powerplay. After crunching two fours off Prasidh Krishna, Patidar sliced but could not clear the man at backward point. Fortunately for him Parag spilled the catch at eye-level.

du Plessis’ wicket in the eleventh over sparked a mini-collapse. Glenn Maxwell (24) and Mahipal Lomror (8) both came and went. Patidar brought up his fifty off 42 balls with a six off Yuzvendra Chahal, right before the start of the slog overs.

Patidar was not originally chosen for the squad, but was drafted in as a replacement player for Luvnith Susodia at the start of the season. He’s played eight games for RCB so far after they dropped Anuj Rawat halfway through the league. Patidar has scored 333 from seven innings and average 55, while batting at a tremendous strike-rate of 152. He has two fifties and one hundred, which was the driving force behind RCB knocking out Lucknow Super Giants in the Eliminator.

Man this Rajat Patidar guy is such a find for RCB. Went unsold in the auction, came in as a replacement player and has played two gun knocks in the knockout stage. Stuff of dreams.

It took 40 balls but Patidar with another half century in the playoffs. And,. What a shot to get there. Wow.

So impressed with Patidar, certainly a future star of RCB in coming years.

Another impactful inning from Rajat Patidar 👏

Man this Rajat Patidar guy is such a find for RCB. Went unsold in the auction, came in as a replacement player and has played two gun knocks in the knockout stage. Stuff of dreams.

Rajat Patidar absolute gem of a knock. Faced the hardest spell and attacked their leggie and offie with no runs being scored at the other end. Top man.

Thank you for the entertainment Patidar. Can't wait to see you next season. #IPL

‘Virat Kohli is the chief clapping officer of RCB’ – Twitter frustrated by another Kohli failure in Qualifier 2
‘Couldn’t defend 16 in the last match, now gets the big wicket of DK cheaply’ – Twitter impressed by Prasidh Krishna spell