‘A man can want both his wife and gf at the same time. But that’s not wise, is it?’-Twitter reacts as Ricky Ponting wants both Rishabh Pant and Dinesh Karthik in the XI 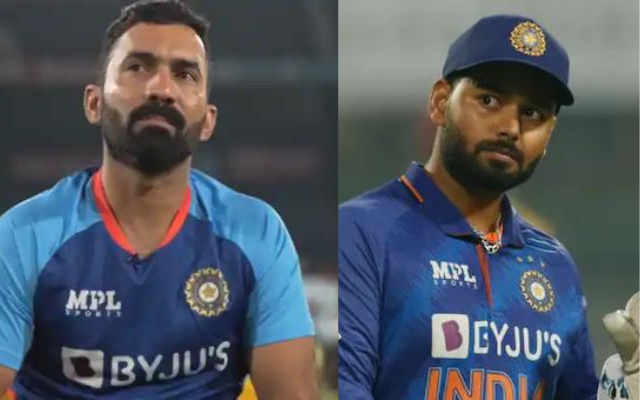 Ricky Ponting, a former Australian captain, believes that Dinesh Karthik and Rishabh Pant are both competent enough batters to play for their respective teams in the same playing XI at the 2022 Twenty20 World Cup.

Ponting conducted his five face-offs for the flagship event in his most recent ICC assessment, and one of them was the intense argument about who should be in the playing XI. Should we go with Pant, who has the ability to smash bowling attacks, or Karthik, who is the “designated finisher”?

What did Ricky Ponting say regarding Rishabh Pant vs Dinesh Karthik?

“Who should be the designated wicketkeeper-batter in the team has been a topic of heated discussion in Indian cricketing circles for a considerable amount of time. While Karthik may claim to be a great finisher, many people are supporting Pant because of his tremendous potential,” Ponting said in his piece

In a few instances, India has played with both players in the same team, and Ricky Ponting feels that this should be the strategy that Rohit Sharma uses moving ahead with his squad.

Ponting praised both of them and said, “I think that both of these players are on India’s best team. I don’t care if they are both keepers, as long as they can hit, I think that’s enough.”

“Rishabh in the middle order and Dinesh as a finisher, they look very dangerous to me,” the Australian legend said about their skills.

Ponting thought that Pant was better than Karthik in the end, so Pant is likely to get more chances.

“Look, I’m just going to pick Rishabh over Dinesh because I think he might get a few more chances than Dinesh,” said Pant’s Head coach at Delhi Capitals.

Yep he wants Aus to win so that's why he's selecting them both. Nice strategy 👍

So Ricky Ponting wants India to have an earlier group exit in T20 WC.

A man can want both his wife and gf at the same time. But that's not wise, is it?