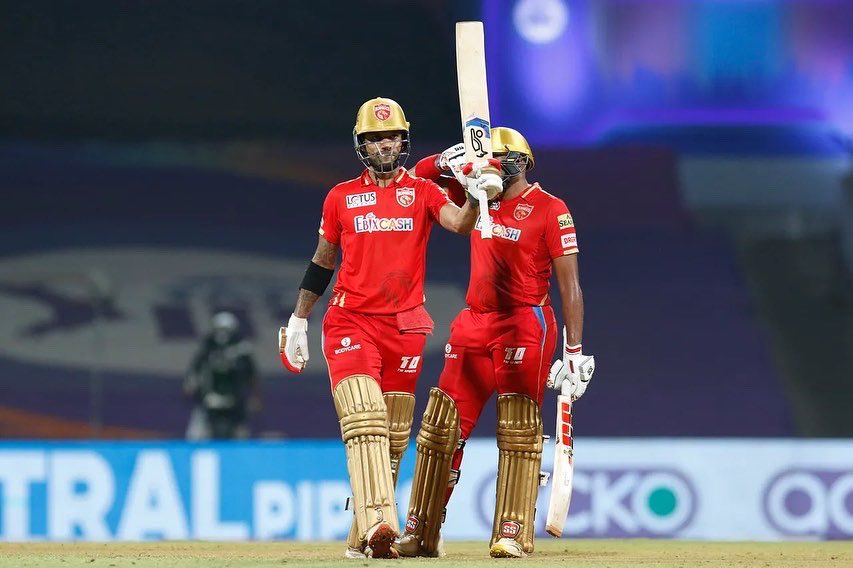 Shikhar Dhawan’s half-century led Punjab Kings home in their 143-run chase against Gujurat Titans on Tuesday. He scored an undefeated 62 off 43 balls at a strikerate of 112, and his knock included eight fours and a six. PBKS won by eight wickets with 24 balls remaining, handed GT their second defeat of the season and moved to fifth position of the points table.

In a surprise move, PBKS skipper Mayank Agarwal dropped himself down the order and it was Jonny Bairstow who came out to bat alongside Dhawan. The Englishman hasn’t been in the greatest form himself, though and the experiment failed when he was dismissed in the third over after scoring 1 from 6 balls. Dhawan then stitched together an 87-run partnership off 59 balls with Bhanuka Rajapaksa, staying calm at one end while the Sri Lankan teed off for his 28-ball 40. In the end, Liam Livingstone’s cameo (30 off 10) took PBKS home in double quick time.

The left-hander now has 369 runs from 10 games, averages 46 and is third in line for the Orange Cap. Dhawan’s strike-rate of 124 seems quite sedate when compared to the strike-rates of the top two run-getters, Jos Buttler (150) and KL Rahul (146).

The game was set up in the first innings by Kagiso Rabada’s four wicket haul. He took the wicket of Wriddhiman Saha in his opening spell, one of only two batters who looked comfortable during the course of Gujarat’s innings. GT skipper and highest run-scorer Hardik Pandya couldn’t make it to a fourth back-to-back fifty today; he was dismissed by Rishi Dhawan immediately after the powerplay after scoring just one run. Punjab Kings’ form batter Liam Livingstone chipped in with the wicket of David Miller, and Rabada cleaned out the lower order. Rahul Tewatia and Rashid Khan fell in the space of two balls in the 17th, and Lockie Ferguson met the same fate an over later.

Shikhar Dhawan is an ipl legend. Has Scored a minimum of 300 runs in 13/15 seasons. Just keeps clocking them season after season. What a player 👏

Shikhar dhawan is a world class batsman. One of india’s best ever opener. Most underrated.

144 was always Shikhar Dhawan territory. The way he let deliveries seaming away pass through to the keeper showed a lot of maturity when he was able to cash in on the pies. This is a massive NRR boost for PBKS.

Dhawan scored at a good clip in the PP, just putting away bad balls in his favorite zone, playing his reliable cut shot. He was even willing to leave it alone if he saw the ball as a threat. Just the sort of innings Punjab needed to pace this chase.

Just realised Dhawan is the third highest run getter so far this season. Hasn't really felt like it. No eye catching or major scores. Just quiet, consistent, ruthless accumulation. Testament to his growth as a T20 batsman.