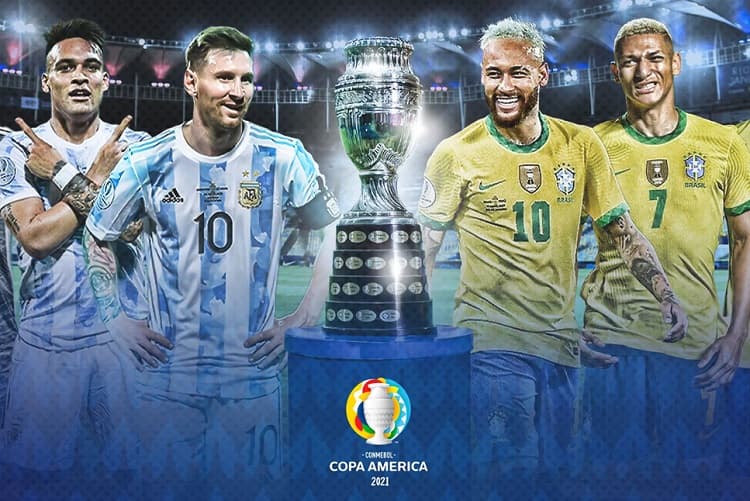 Defending champions Argentina to face the arch-rivals Brazil on 11th July 2021. The ongoing Copa America 2021 is all set for the finals. There no bigger game than the match against Argentina and Brazil. The football fans are eager to witness the clash between Neymar and Messi. Check Argentina vs Brazil: Copa America Final predictions, kick-off time, team news, venue, h2h results, latest odds.

For Indian football fans, the entire match will be aired on Sony Ten, in Hindi and English. the match is scheduled to kick off at 5.30 AM IST. Meanwhile, all updates and recent news about the match will be uploaded here. Let’s take a look at the details and team news for Sunday’s match.

The Copa America 2021 is hosted in Brazil, in Rio de jenrio. initially the schedule of Copa America 2021 schedule to be held in Argentina and Colombia. Eventually, Argentina was removed from hosts because of the rising Covid-19 outbreak in the country. Mané Garrincha hosted the opening on 13 June 2021.

the finals will take place in Estádio do Maracanã, Rio De Jenerio. The capacity for which is Capacity: 78,838. Although, Due to COVID-19 all the matches for public viewing is not permitted for now. All matches in this tournament were decided to be held behind closed doors, and all delegation members and referees will be vaccinated. However, All delegations will be limited to 65 members.

Brazil vs Argentina head-to-head record is led by Brazil, who have won 46 matches and lost 40 matches in the 111 encounters between the two teams. There have also been 25 draws between the teams. Nevertheless, The last time Brazil had faced Argentina at the Copa America was in the 2019 edition’s semi-final, in which the Selecao won 2-0.

South American giants will see Lionel Messi going up against his former Barcelona teammate Neymar. Both have enjoyed themselves in the tournament so far. Best friends Neymar and Lionel Messi will be up against each other at the iconic Maracana Stadium in Rio de Janeiro.

While Brazil has no major injury concerns ahead of the final, the suspension of Gabriel Jesus will be a huge miss. The forward was sent off during Brazil’s quarter-final game against Chile when he fouled Eugenio Mena with a flying kick. however, South American soccer’s governing body CONMEBOL has suspended the striker for two matches.

Meanwhile, the Argentina Fans will be hoping to see captain L. Messi on the field after his ankle injury. The skipper was seen playing 40 minutes with a blood-soaked sock on Wednesday. In the finals, tied after extra time, the match will be decided by a penalty shoot-out.