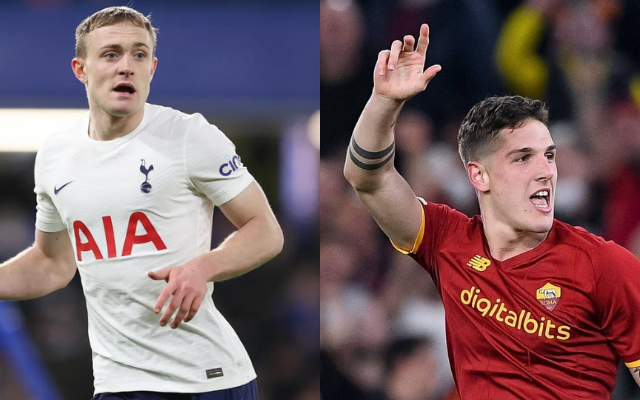 It has been claimed that AS Roma has requested that Oliver Skipp be included in the deal for Nicolo Zaniolo. However, Tottenham is not interested in pursuing such a proposal

According to a publication in Rome called Giallorossi, AS Roma has made it clear that they want Oliver Skipp to be included in any prospective trade involving Nicolo Zaniolo. Tottenham is interested in acquiring the Italian international but does not seem to be willing to include the young midfielder, who is 21 years old, in a part-exchange deal.

AS Roma has been given the challenging task of improving Jose Mourinho’s team in time for the 2022/23 season while adhering to the financial restrictions imposed by their restricted resources. To this point, they have been able to pull off a few successful transactions, the most notable of which is the free transfer of Paulo Dybala to the Stadio Olimpico.

Tottenham are still pursuing a deal for Nicolo Zaniolo who is indeed open to the move.

The addition of the Argentine immediately boosts the offensive quality of the squad, but it also presents Mourinho with a challenging new option to consider when putting together his lineup. When the AS Roma manager has Dybala at his disposal, he has the ability to move away from Nicolo Zaniolo and utilise the Italian international to earn cash in the market. This gives the manager more freedom.

There have been rumours that Juventus are interested in Zaniolo. Nonetheless, it seems that Tottenham has the most significant interest of any team in the attacker. Spurs have attempted a number of different strategies in the hope of signing the winger, who is now 23 years old, but have been unsuccessful so far.

The most recent move made by Tottenham was to attempt to incorporate some of its undesirable talents, such as Japhet Tanganga and Tanguy Ndombele, into the discussions. However, Roma has no interest in either player at this time. There were rumours that Roma had some interest in signing Tanganga, but it seems that the English defender is getting closer to signing with Serie A rivals AC Milan instead.

Will the deal go through?

Mourinho, on the other hand, is not interested in Ndombele at all and instead is apparently pushing for Oliver Skipp to be included in the transaction, which also includes Zaniolo. Tottenham is hesitant to meet Roma’s asking price of €60 million for the Italian international and had hoped that Roma would accept a lesser value in exchange for the inclusion of players.

Tottenham are still pursuing a deal for Nicolo Zaniolo who is indeed open to the move.

However, Tottenham is not quite ready to part ways with Skipp just yet since the people in control of the club believe that the 21-year-old prodigy has a bright future ahead of him. As a result, they have decided that they are not going to include Skipp in the discussions. However, this does not imply that Tottenham will give up on their attempt to sign Zaniolo since the possibility of a loan transfer has lately been brought up.

For the time being, Roma will want to do all they can to stick to their valuation and get the most money possible for their star attacker, who may eventually be permitted to depart. It should be noted that this does not imply that the Giallorossi would be averse to dropping their asking price. Nonetheless, it is believed that they may not go any lower than the €50 million level when it comes to the Italian international.