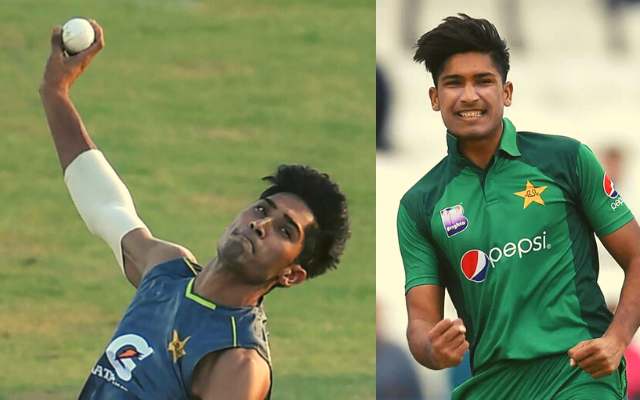 Mohammad Hasnain has been given the all-clear to resume his international bowling career. The decision was made based on an evaluation of his actions, during which he bowled three overs while being supervised. It was discovered that his elbow extension has dropped within the permissible limit. Specifically, it has decreased from an earlier flex of 17-24 degrees to flex of 12-13 degrees.

Hasnain, who was suspended from bowling in international cricket the following month after being found guilty of using an improper action while playing for Sydney Thunder in the Big Bash League in January of this year, is now eligible to resume his international career. Hasnain was eligible to bowl in Pakistan’s domestic circuit during the ban, but the Pakistan Cricket Board (PCB) opted against allowing him to do so. Instead, he had to concentrate on making adjustments to his action.

Hasnain has corrected his bowling action

After giving some thought to sending Hasnain to an outside consultant, the PCB ultimately opted to give its high-performance coach, Umar Rasheed, the responsibility of working with Hasnain at the High-Performance Centre in Lahore. On January 21, his examinations were carried out at Lahore University of Management Sciences, a testing facility that has been granted ICC accreditation. His bowling action was determined to violate the rules after an independent expert from Cricket Australia looked through the test report and validated its findings.

In an early evaluation, it was determined that Hasnain rotated his arm to swing the ball. This procedure was erratic and resulted in a jerk being produced. His landing was all over the place, which threw off his alignment and allowed him to bowl faster deliveries. It is well known that the framework of his new bowling action has not changed. Nevertheless, he has made adjustments to his wrist, arm rotation, and landing that will enable him to bowl with an action that is consistent and repeatable. Hasnain was responsible for delivering around 5000 balls and practicing shadow bowling while Rasheed assisted him in reworking his alignment.

Mohammad Hasnain is an emerging fast bowler in Pakistan Cricket

Hasnain had been a regular member of Pakistan’s white-ball teams and had even completed a hat trick in a Twenty20 International before he was banned from the team. He had shown promise in his brief time playing in the Big Bash League (BBL). His first game was a success, as the Thunder defeated the Adelaide Strikers by a score of 28 runs, thanks to his three wickets.

After Mohammad Amir and Wahab Riaz began making fewer and fewer appearances for Pakistan in international competition, the Pakistan Cricket Board (PCB) invested in Hasnain, one of the few young fast bowlers still in the country. In addition to this, he was one of the very few people in Pakistan who could routinely reach speeds of 145 kilometers per hour. It remains to be seen whether or not he can keep up the pace when the corrective work has been completed.

Since the ban, he has not participated in any competitive cricket. Rasheed, on the other hand, is certain that his action is okay and that he is stronger than he has ever been.

‘I Don’t Believe That Is The Case’- Wasim Jaffer Feels That The Indian Team Management Is Not Considering Rishabh Pant As An Opener
WATCH: Hilarious mix-up results in three runs after keeper collects the ball in European Cricket League