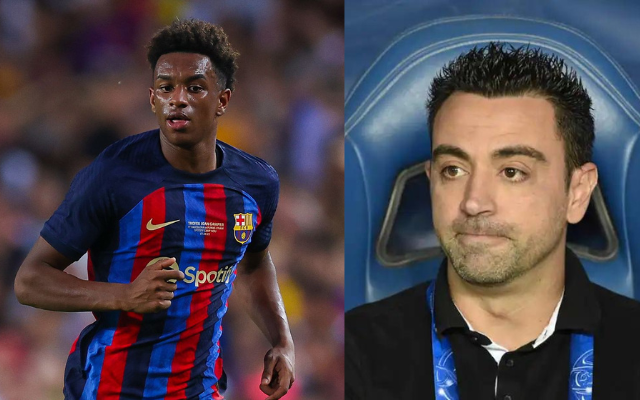 In the 2022–2023 campaign, Barcelona has uncovered yet another gem of talent in Alejandro Balde, following in the footsteps of Pedri and Gavi in the previous two campaigns.

Even though the defender from La Masia made his debut with the first team the previous year, he is only now experiencing his true breakthrough in the current campaign, having already supplanted Jordi Alba as the first-choice left back.

Balde has started all but one of Barcelona’s La Liga matches this season. The one game in which he did not start was the season opener against Rayo Vallecano. In addition, he has been involved in three assists during the process, rapidly establishing himself as an essential component of Xavi Hernandez’s system.

Therefore, the fact that Barcelona is attempting to secure Balde on a new long-term deal should not come as a complete surprise to anybody. The present contract that the player, who is just 18 years old, has with the club is set to expire in 2024, and the Catalans are determined to extend his tenure at Spotify Camp Nou for a considerable amount of time.

According to MARCA, on the other hand, the Blaugrana are reportedly unconcerned about the status of his contract and are not in a rush to sign an extension at this moment since they feel there is sufficient time for them to engage in discussions over a renewal.

By signing up young players who are on the rise to long-term contracts, Barcelona has been doing an excellent job of constructing a foundation for the team’s future. They have previously granted contract extensions to Ansu Fati, Pedri, and Ronald Araujo, and most recently they did the same for Gavi.

The Blaugrana are also considering extending the terms of their contracts with the goalkeeping tandem of Inaki Pena and Arnau Tenas.

Even if a new contract for Balde is on the table, and talks about it have already taken place, the club has decided to put a hold on negotiations for the time being since they are not under immediate pressure to give out a new agreement.

However, this does not imply that they do not plan to extend Balde’s contract in the future. Barcelona is planning to retain the left back until 2024 and hopes to reopen contract negotiations with him over the next months.

ISL 2022/23: Full details, Where to watch the matches in India and the full schedule
REPORTS: Barcelona is planning to sell Ousmane Dembele for a higher price in January