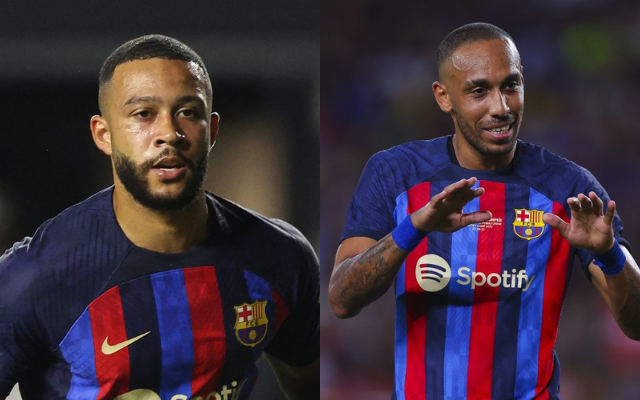 Before the summer transfer window closes a little more than a week from now, there is a possibility that there could be a substantial reshuffle in Barcelona’s offensive department.

The additions of Raphinha and Robert Lewandowski improved the quality of the Blaugrana attack. However, it also meant that the game-time of some of the current players on the roster would be hampered, which would likely result in Memphis Depay leaving the club in the near future.

The 28-year-old player was informed that he would no longer play a key position in Xavi’s plans, and he has since made arrangements for an escape. It seems that the Dutchman will be moving to Juventus in the near future.

Along with Depay, Pierre-Emerick Aubameyang is expected to leave Barcelona. The Catalan club is eager to decrease their overall salary mass to register Jules Kounde, thus the likely departure of Aubameyang is a direct result of this urgency. It is speculated that the 33-year-old will arrive at Chelsea in the very near future.

Three alternatives for the Blaugrana

Should any of them depart the club, Martin Braithwaite’s status as a bench player at Camp Nou would mean that Robert Lewandowski would become Barcelona’s sole natural No. 9 player on the team. If the club’s financial situation improves, there is a chance that they will be able to bring in a new striker who won’t cost as much.

And it has been reported by SPORT that the powerhouses of La Liga have been presented with the possibility of signing as many as three attackers to serve as possible replacements for Aubameyang and Depay.

One of the forwards whose names are on the table at the Barcelona offices is Andrea Belotti, who is now a free agent following the expiration of his contract with Torino. In addition to the Italian, the Blaugrana have been presented with the opportunity to sign free agents Adnan Januzaj and Edinson Cavani. Both of these players are now on the market.

Belotti is now at the peak of his career and has already shown that he can score goals for Italy. His pay demands may determine whether or not Barcelona decides to sign him, even though he has the potential to be a useful addition.

Januzaj is a player whom the Catalans had evaluated early this summer as a low-cost option for Raphinha, shortly after he was released by Real Sociedad at the end of his contract in June.

Cavani, a striker who formerly played for Manchester United and Paris Saint-Germain, would be an excellent addition to the team because of his wealth of experience and winning mentality, even though he missed significant time due to injury during his time at Old Trafford in the previous campaign.

If both Depay and Aubameyang were to depart Barcelona, the club would almost certainly give serious consideration to the idea of signing another striker. However, the Catalans do not want to sign anybody only for the sake of adding that person to their roster.

If Xavi and the rest of the team were to bring in a new attacker, it would have to be a move that was rational for the club from both a financial and a sporting point of view. However, for the time being, the three names that were just stated are possibilities for the Blaugrana.