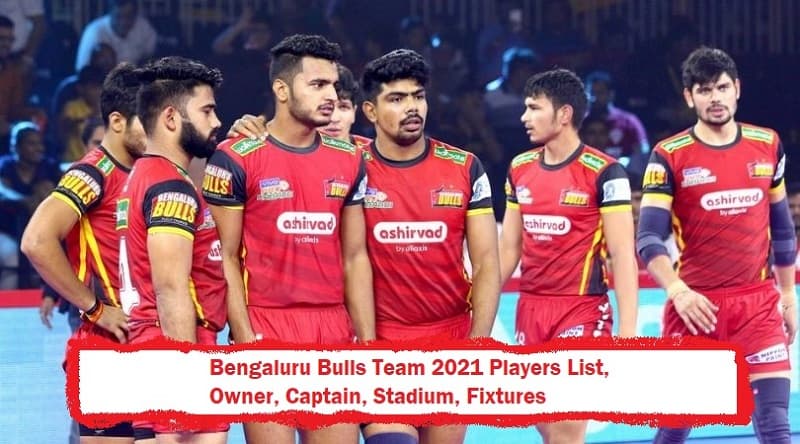 Kabaddi is a sport that is played in rural parts of India. Later, in 2014 it was launched at a professional level named as Pro Kabaddi League. Check Bengaluru Bulls Team 2021 Players List, Owner, Captain, Stadium, Fixtures.

12 teams play each year in the League and battle through victory. The game follows the same rules as kabaddi with a few additions. Pro Kabaddi had 7 enthusiastic seasons, and fans are expecting the same this year.

Bengaluru bulls are one of the Franchise teams that participate in the annual Pro Kabaddi League. They have a team based in Bengaluru, Karnataka. They were crowned as the winners of the Pro Kabaddi in 2018; after they beat Gujarat Fortune Giants in the finals. So take a look at Squad, Bengaluru bulls retained players 2021, Owner, Captain, Stadium, And Fixtures.

Bengaluru Bulls have been proving themselves better each year. They have been working hard as a team and the previous few years Bengaluru Bull’s performance was better than any other team. What makes them well performers, is that each player has their own unique skill.

Take a look at the squad list and the position each player will be playing at.

Bengaluru Bulls 2021 Who is the Owner and Captain?

Kanteerava Indoor Stadium is the home ground for the team Bengaluru Bulls. It has a capacity of nearly 4000 people. The ground was built in 1995. Karnataka Athletic Association is the owner of the ground. The Stadium hosted the SABA Championship in 2015 and 2016. Further, Team India has frequently used the facility for training sessions.

The Bulls have been proving themselves stronger over the past seasons. the Overall win by them is 60. Take a detailed look at the entire table of the Bulls over the years.