‘Best replacement for Bumrah 🤪🤪’-Twitter reacts as Irfan Pathan, the finisher of India Legends hit 37* runs from just 12 balls including 5 sixes and 1 four 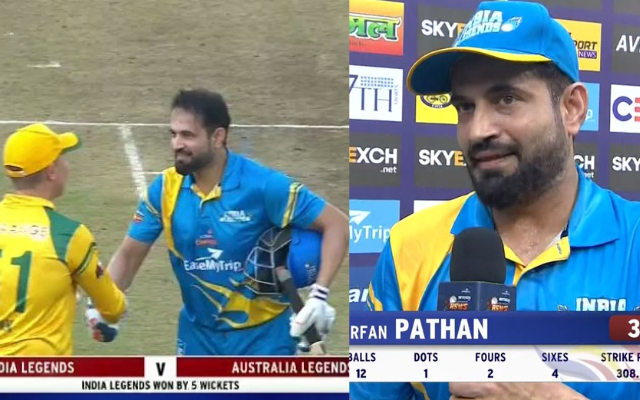 Irfan Pathan has been the talk of the town for his impeccable batting show in the ongoing Road Safety World Series T20 2022. Former Indian cricketer Irfan Pathan showcased his batting masterclass against Australia Legends.

The former Indian all-rounder plays for India Legends in the tournament. The southpaw stole the spotlight by scoring runs at the rate of knots. He chipped in with an unbeaten 37 off 12 balls where he built his innings with the help of 2 fours and 4 sixes.

Moreover, he played at a strike-rate of 308.33, which is really impressive. Fans took to their social media handles and heaped praise on Irfan Pathan for his batting performance.

He drew plaudits for his exceptional acting where he played the role of Interpol (International Criminal Police Organization) agent. Now, he played one heck of a knock to help India Legends beat Australia Legends by 5 wickets.

Meanwhile, India Legends are second on the points table. They have played five games where they won two games. On the other hand, the rest of the three games ended as No Result due to rain. India Legends have gained 14 points and have a Net Run Rate of +2.886.

Irfan Pathan, the finisher of India Legends, 39* runs from just 12 balls including 5 sixes and 1 four – what a knock in the Semifinal. pic.twitter.com/De6CogqvsB

Still better than many regulars

They are playing more games than the current players.