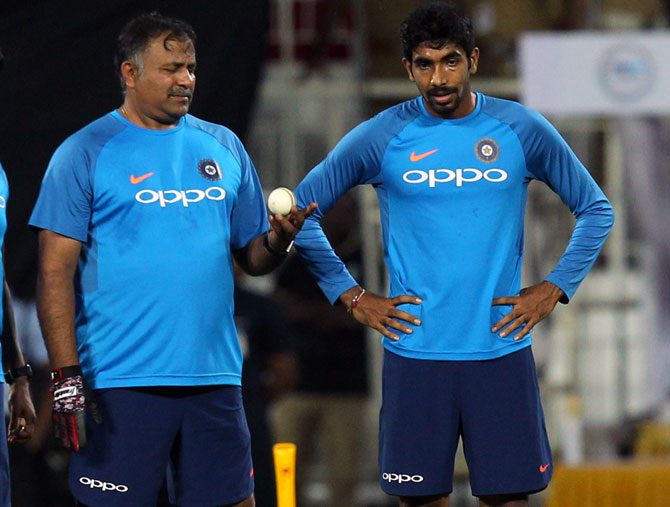 Bharat Arun, a former India bowling coach, has stated why fast bowler Jasprit Bumrah is unable to head the Indian Test squad. Following India’s 1-2 Test series loss against South Africa last month, Virat Kohli resigned from his position as Test captain, leaving the position vacant. Since then, neither the selectors nor the BCCI has named a new captain for the team.

At one point, India had a commanding lead in the series after winning the first Test. The squad seemed to be on its way to claiming the first-ever Test series in the rainbow country. Since then, the team’s fortunes have taken a downward turn. They went on to lose the second and third Tests, ensuring that their ambition remained a pipe dream for them.

They are now in fifth place in the World Test Championship, which is a disappointing result. With 10 games remaining, the 2021 finalists have won 4, lost 3, and drawn two games, for a win percentage of 49.07 percent. Meanwhile, Arun has said that Bumrah would not be able to lead the Test squad owing to concerns with workload management. “There was also some discussion over whether Bumrah should be the team’s captain. The question is, will he participate in all of the Tests? Would Bumrah be able to participate in all of the Tests now that workload management has been implemented? What happens if he has to take a break in the midst of a series? After then, there is another shift in leadership,” Bharat Arun said. According to him, it is “not recommended” to replace the captain mid-series “unless the captain has suffered an injury.” Bharat Arun made this statement when speaking to the sports channel Sportstar.

In addition, Ravichandran Ashwin will be unable to lead the team: Bharat Arun

Even Ravichandran Ashwin, according to the former bowling coach, is incapable of leading the squad. He reasoned that there may be circumstances in which his services would not be required. Arun goes on to say that he would want a batsman to be selected as a Test captain.

“What if your combo changes? It’s the same with Ashwin. Considering the current situation, I believe that a bowler becoming a captain would be a difficult task. You also take into consideration the various kind of pitches that you play on… Because of the team’s plan, if you have to play just one spinner overseas, and that happens to be Ravindra Jadeja, then it becomes an issue. As a result, I would prefer to choose a batsman to be the Test captain,” Bharat Arun stated.