“Biggest fraud in history of South Africa cricket”, Twitter reacts after Temba Bavuma chips in with a string of low scores in last 7 T20Is 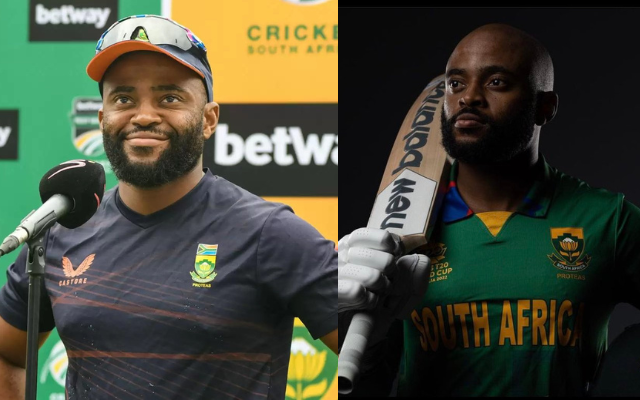 South African captain Temba Bavuma is currently leading his team in the ongoing edition of the ICC Men’s Twenty20 World Cup 2022 tournament in Australia. Proteas got off to a disappointing start to their campaign.

They were almost sailing through for an easy win against Zimbabwe but rain had other ideas. As per ICC rule book, a team must complete a quota of 5 overs in order to bring the DLS in the equation.

Proteas who were batting at 51/0 in three overs against Zimbabwe were forced to leave the field due to rain. Currently, Proteas are taking on Bangladesh national cricket team in the 22nd game of Super 12 of the showpiece event.

Meanwhile, Proteas captain, Temba Bavuma came under fire for chipping in with a series of low scores for the national cricket team. He hasn’t been able to bring the best out of himself in the last seven T20Is for South Africa.

Shockingly, all the seven scores that he registered turned out to be ‘single-digit scores’, including two ducks. Overall, he scored 23 runs in 7 games. Talking about his performance during the today’s match against Bangladesh, he hardly showcased his mettle when he arrived at the crease.

He scored just 2 runs off six balls before being dismissed by Taskin Ahmed in the last ball of the first over.

Most consistent player in not performing

Atleast he does well in Tests 😂

He will comeback against India 🔥

23 runs in 7 innings ?
Way too much than his calibre.
We don't let such player score runs here in our Club Cricket 🤣🤣