‘Bodied himself with 100kph inswing, how will he play Shaheen?’-Twitter reacts as Rohit Sharma says that Jhulan Goswami troubled him with her inswing deliveries 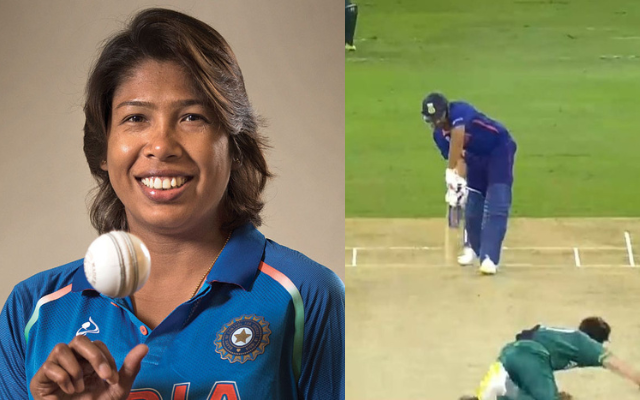 In the meanwhile, the captain of the Indian men’s cricket team, Rohit Sharma, has expressed his gratitude to the veteran bowler and revealed that he had a difficult time confronting Goswami in the practice nets. The conversation continued with Rohit stating that Goswami’s excellent in-swing bowling left him speechless.

What did Rohit Sharma say about Jhulan Goswami?

“When I was injured at NCA, I talked to her a few times. She was there, too, and we were practicing together. And her in-swinger gave me something to think about. So, there was a lot of talk going on. She asked for some things, and I told her some things,” Rohit said this at a press conference before India’s home series with Australia.

“Every time I’ve seen her play, she’s been so excited to play for her country. I don’t know how old she is, but even now she is running in hard and trying to knock out batters, which tells you something. So, it shows how much she cares. I can only hope for the best for her. She’s a once-in-a-generation player,” he added.

Goswami will be participating in the one-day international match between India and England that will take place at the County Ground in Hove. During the first innings, the experienced bowler bowled quite effectively, as shown by the fact that she allowed only 20 runs over the course of her 10 overs and took one wicket. As a result of her efforts, the host side was only able to score 227 runs in their allowed 50 overs. This was a significant victory for the Women in Blue.

lol how he will face Shaheen then 😂😂

Women are not legend

Everybody meets him NCA as he is regular customer there 🤣🤣

Bodied himself can't even play a inswinger that also from a ☕

‘Old Australian tactics, don’t fall for it’-Twitter reacts as Pat Cummins says that Virat Kohli will be toughest opponent for them in the T20I series against India
‘Harshal’s batting holds the key to the Indian team balance’-Twitter reacts as Harshal Patel says that Rohit Sharma and Rahul Dravid have secured his place in the playing XI