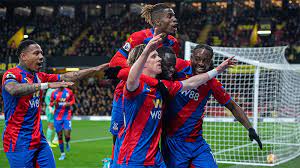 Crystal Palace vs Stoke City: The fifth round of the FA Cup is here. The struggling side in the English Premier League, Crystal Palace are all set to face Stoke City in their backyard. Ahead of the knockout game, here is our preview and prediction.

Crystal Palace drew with relegation contenders Burnley in the previous fixture of the Premier League. After going up by a goal in the first half, the team lacked the intensity to bury the game and Burnley took the game to the opposition. They came away with the point over the weekend.

On the other hand, Stoke City lost to AFC Bournemouth in the EFL Championship fixture. Despite going ahead in the 20th minute, the concentration lapse in the last ten minutes of the game cost Stoke City all three points.

Both teams have met 60 times in the past and Crystal Palace have won 28 games compared to Stoke City’s 19. The other 13 games have ended in a draw.

Stoke City: Harry Souttar and Abdallah Sima are injured whereas Morgan Fox is suspended for the game.

Though Crystal Palace are not in great form, they have enough armour in their armory to defeat Stoke City. Despite the close game, we predict the hosts to nick the win in the FA Cup knockout tie.