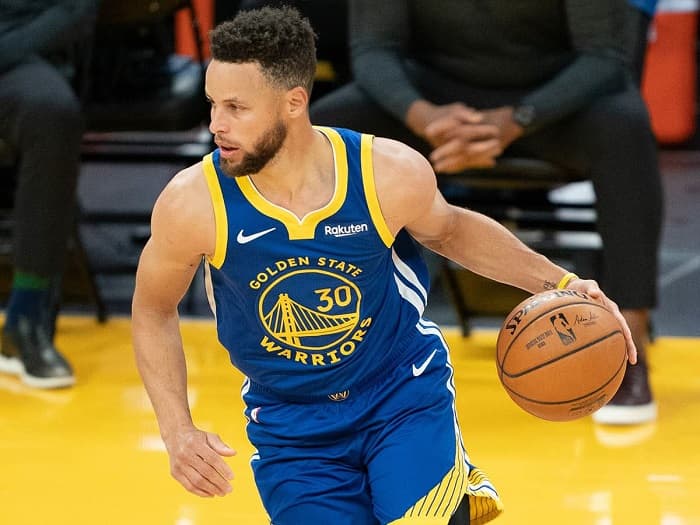 Stephen Curry has finally won his first Finals MVP after the Golden State Warriors won their 7th NBA Championship and 4th Championship in eight years after beating the Boston Celtics 103-90 in Game 6 of the 2022 NBA Finals at the TD Garden. It’s been a long wait for the 34-year-old with many believing the lack of this award in his trophy cabinet was the only factor affecting his legacy as one of the greatest players in the game of basketball.

Curry’s been the face of one of the greatest dynasties in the sport’s history. He’s a four-time NBA Champion, two-time MVP, eight-time NBA All-Star and the greatest shooter in the history of the game. Earlier this season, Curry broke the all-time three-point record, breaking Ray Allen’s record. He’s also widely held responsible for changing the way the game is played, normalizing three-point shooting as the most effective way to score points.

The Warriors have been the great side of this era but they’ve had some bumps on the road. After making five straight NBA finals, the departure of Kevin Durant, a long-term injury to Klay Thompson and an injury to Curry himself, an ageing Warriors side was undergoing a bit of a transition. However, under Steve Kerr, the team managed to hold onto the core of Curry, Draymond Green and a returning Thompson, to win their 4th title in eight years.

Curry hit 34 points in Game 6 but his 43 points in game 4 of this series that will immortalize him in the history books. Like Curry, there have been other great performances in NBA finals. He averaged 31 points, 6 rebounds, 5 assists in 6 games in the 2022 NBA Finals.

Endearingly referred to as the ‘Greek Freak’, Antetokounmpo’s wait for an NBA championship came to an end last year. Much like Curry, the Bucks have built around Antetokounmpo’s unique strengths but there’s an even greater reliance on the 27-year-old power forward. After winning back-to-back regular season MVP awards (2019/20 – 2020/21), it was only a matter of time before Antetokounmpo got hold of the big fry. Giannis averaged 35.2 points, 13.2 rebounds and 5.0 assists in 6 games in the 2021 NBA Finals.

The face of the game for the last two decades, LeBron James is one of the game’s greatest ever players. Already a 4-time regular season MVP. he added a 4th NBA Championship and 4th NBA Finals MVP in 2019/20 at the age of 35. Having already won the biggest prizes with the Miami Heat and Cleveland Cavaliers, this was the most mature version of James, who led the Lakers to their 17th NBA Championship. James averaged 29.8 points, 11.8 rebounds and 8.5 assists in 6 games in the 2020 NBA Finals.

Referred to as the ‘Claw’, Kawhi Leonard won his second NBA MVP finals in his only season with the Toronto Raptors. The move to Toronto surprised everyone after a breakdown in his relationship with Gregg Popovich at the San Antonio Spurs. Leonard will most fondly be remembered for his buzzer beater against the Philadelphia 76ers in game 7 of the Eastern Conference semifinals. He used his two-way game to dominate throughout the playoffs and is a hero in Toronto to this day, helping them win their first NBA Championship against a weakned Warriors side. Leonard averaged 28.5 points, 9.8 rebounds and 4.2 assists in 6 games in the 2019 NBA Finals.

Kevin Durant won his second NBA MVP finals with the warriors in 2017/18, crystallizing their dynasty. The 12-time NBA all-star is one of the best active players. Like the Warriors, he showcased his dominance throughout the playoffs and the finals.  Durant put in a complete performance, averaging 28.8 points, 10.8 rebounds and 7.5 assists in a 4-0 sweep of the Cavaliers.

The first of this two NBA Finals MVP awards, Durant made a a highly controversial switch from the Oklahoma City Thunder to the Golden State Warriors in a bid to win more silverware. Despite the criticism from media and fans for taking what was considered an easy route to success, Durant was vindicated after winning his first NBA Championship and NBA Finals MVP award. Despite playing in a pretty strong Brooklyn Nets side since his move away from the Warriors, Durant hasn’t achieved the same success and this move seems to have paid off in hindsight. Durant averaged an incredible 35.2 points, 8.2 rebounds and 5.4 assists in 5 games in the 2017 NBA Finals.

Here’s an updated list of all the Finals MVP winners: