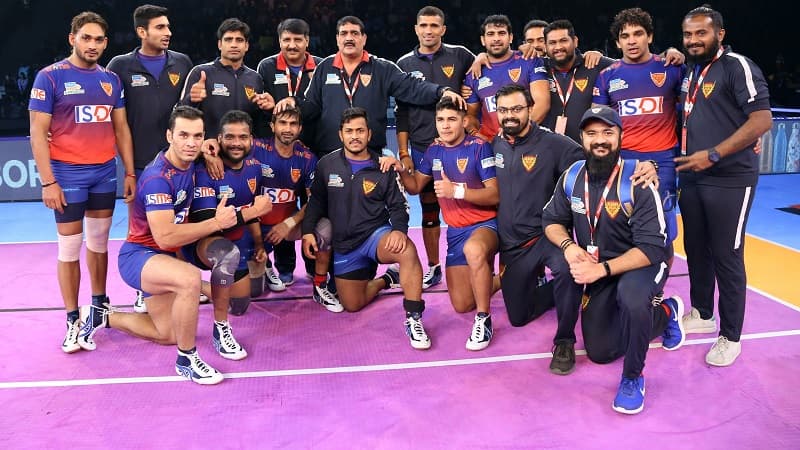 Kabaddi is a sport that is played in rural parts of India. Later, in 2014 it was launched at a professional level named as Pro Kabaddi League. Check Dabang Delhi Team 2021 Players List, Owner, Captain, Stadium, Fixtures.

Dabang Delhi is one of the coolest teams that play in the PKL seasons each year. It was established in 2014, the same year as the inaugural season of PKL. The team is based in Delhi, the capital city of India. The team has skilled and strong players, so check out the entire details, dabang delhi squad 2021, Complete Players List, Owner, Captain, Stadium, And Fixtures.

Dabang Delhi is the last year runner ups of PKL 2019. They managed to compete in the finals. The reason they are unmatched by the other teams is the teamspirit. The team consists of players who have a never give up attitude. The teams consists of 2 foreign players from Iran.

Take a look at the list of players in the Dabang Delhi.

Dabang Delhi 2021 Who is the Owner and Captain?

Radha Kapoor is the owner of the team Dabang Delhi. JK Super cement is the current sponsor of the team. The team is guided under the head coach, Krishan Kumar Hooda. The team is led by the captaincy of Joginder Singh Narwal. He plays as a defender, Left Corner. This tall jock had an overall tackle strike rate of 47.26%

The Jersey colors of the team are Blue and Red color.

Dabang Delhi plays all its home matches at Thyagaraj Sports Complex is a sports stadium in New Delhi, India. It is owned by the Government of the National Capital Territory of Delhi. An area of 16.5 acres with a seating capacity of 5,883 persons.

Dabang Delhi Stats over the 7 Seasons

The team has had 126 matches in 7 years. Out of which they had won 47. Last season was the most successful for the Dabang Delhi players as they won 16 matches and featured in the Finals. They secured 2nd position in PKL 2019. Take a look at the stats here.