“Don’t know Why Certain Fans Get Triggered If Someone Praises Rohit Sharma”, Twitter reacts after Suresh Raina said Rohit Sharma has lots of respect in the Indian team 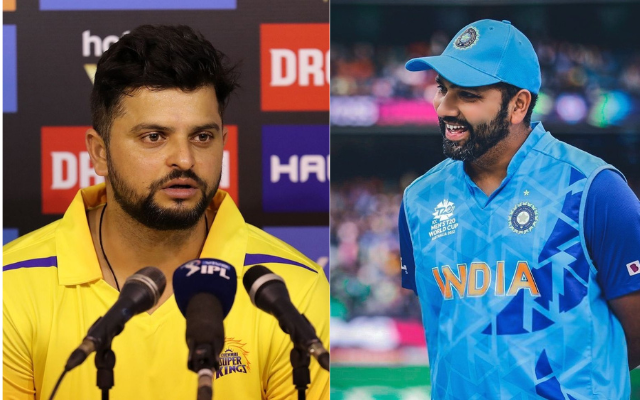 Rohit Sharma has been a brilliant captain for Team India ever since he donned the full-time captaincy role. Apart from those two defeats against Pakistan and Sri Lanka in the Asia Cup 2022, India performed considerably well in the shortest format.

Currently, the Indian cricket team are in Australia for the showpiece event. They started their T20 World Cup assignment on a high as they defeated Babar Azam-led Pakistan cricket team by 4 wickets at the Melbourne Cricket Ground (MCG).

Now, they must have had enough preparations for the upcoming game against the Netherlands cricket team. India will take on the Dutch team on October 27 (Thursday) in the Super 12 fixture at Sydney Cricket Ground, Sydney.

Meanwhile, former Indian cricketer, Suresh Raina reserved the highest respect for Indian skipper Rohit Sharma for the way he has been leading the team from the front. While speaking to news agency, Aaj Tak, Raina added that players in the Indian team respect Rohit a lot.

He added that the Indian skipper has immense respect in the Indian team. Raina further conceded that Rohit is a leader inside and outside as cricketers respect him a lot. Raina’s statement on Rohit Sharma went viral on the internet.

Under Rohit Sharma’s captaincy, India won the Asia Cup and the Nidahas Trophy so far. Besides that, he has been the most-successful captain in the history of the cash-rich Indian Premier League.

Mumbai Indians franchise immensely benefited from the skipper’s services. As a captain, he was pretty sharp in terms of rotating bowlers, making field placements and so on. Under his tutelage, Mumbai Indians became a force to be reckoned with as they have won as many as five trophies to decorate their trophy cabinet.

Suresh Raina (in Aaj Tak) said "Rohit Sharma has lots of respect in the Indian team – he is a leader inside & outside – players respect him a lot".

Don't know Why Certain Fans Get Triggered If Someone Praises Rohit Sharma.

WHEN Team Was Under Pressure Called All Players In A Huddle In Between Overs To Motivate Them . And India Came Back Strongly To Win The Match . pic.twitter.com/EeL5MiAqjD

When Currently India's Best T20 Batsman Was Not Able To Get Into The Indian Team Despite Performing Brilliantly. He Motivated Him Keep Performing Well . pic.twitter.com/6NA5vb92IH

When Rohit Wasn't Even Captain . He Still Did His Best To Make Youngsters Comfortable . And 2nd Video When Kuldeep Was Out Of Team Because Of Low Performance He Still Helped Him Off The Field Which Is Very Rare To See In Any Captain . pic.twitter.com/6JNHgQgmMv

When India Was Touring Newzealand And Samson Was Making Comeback Into Indian Team . This Is How Rohit Sharma Treated Him Despite Not Being Captain In The Team . pic.twitter.com/xXFXQkiAyb