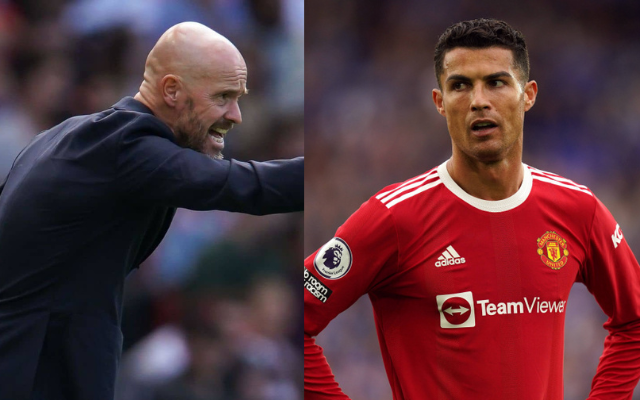 The manager of Manchester United, Erik ten Hag, lashed out at those who singled out Cristiano Ronaldo for criticism for leaving an exhibition match against Rayo Vallecano early.

The veteran player, who is 37 years old and a star for Manchester United, made his first appearance of the preseason on Sunday at Old Trafford in the club’s last exhibition match of the summer. He played the first half of the game but was removed from the action at the break. After the break, he was observed exiting the arena.

It generated a commotion among the supporters, who criticised the star goal-scorer for his lack of excitement in the face of rumours that he would be leaving the team.

In an interview with a Dutch station, Ten Hag expressed his disapproval of Ronaldo’s decision to leave the game early, labelling his actions as “inappropriate.” However, in response to a question on Ronaldo’s behaviour, he said that the Portuguese star wasn’t the only player to depart early on that particular day.

What did Erik Ten Hag say?

He said the following at a pre-match news conference, as reported by Manchester Evening News:

“It is not fair that all of the attention is being focused on Cristiano when there were many other players that departed early. Do some research.”

According to Sky Sports News, Manchester United later clarified that the 37-year-old was indeed one of the players who left the stadium before the full-time whistle was blown, but that it was not a problem for them. Sky Sports News cites United as saying that they were not concerned about the situation. However, since he is constantly looking for other opportunities, the Portuguese’s activity has fueled speculation that he would leave his current club.

This coming weekend marks the beginning of a new season for the Red Devils in the Premier League, and the striker is expected to make his debut off the bench. Ten Hag, on the other hand, is ecstatic that his star has returned and showered him with adulation, adding that he:

“I feel incredible joy right now. We have a good striker. He is present and a member of the team.”

Old Trafford will play host to Manchester United’s opening Premier League encounter of the 2022–2023 campaign on Sunday when the Red Devils take on Brighton & Hove Albion.