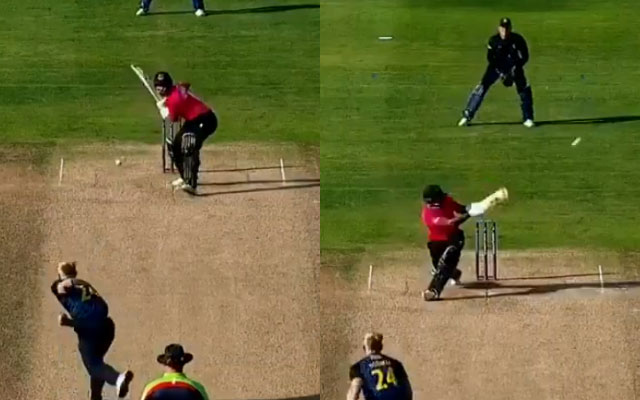 The cricketing world was taken aback when India’s Test specialist, Cheteshwar Pujara. He came out swinging in the Royal London One-Day Cup and displayed an aggressive intent. On Friday, Pujara, who is renowned for his rock-solid defense when playing for the Indian Test squad, smashed 107 runs off just 79 balls, including one over that had 22 runs scored in it.

One would not often think of Cheteshwar Pujara as the kind of player who excels in the game of limited overs. The seasoned batter only plays for the Indian team or the longest format of the game in his international career. Pujara did not play a single game for the Chennai Super Kings during the 2021 season of the Indian Premier League (IPL), even though he was a member of the team for that season.

TWENTY-TWO off the 47th over from @cheteshwar1. 🔥 pic.twitter.com/jbBOKpgiTI

Cheteshwar Pujara came through for Sussex when they needed an aggressive effort in the middle while chasing 311 runs in 50 overs. In the last ten overs of the match, Sussex needed to score 102 runs to win. Pujara altered gears at this point and surged from 50 to 100 in only 22 balls. Pujara scored 22 runs to keep Sussex in the game during one of the overs bowled by England’s Liam Norwell. His run total was 4, 2, 5, 2, 6, and 4 off of Norwell’s six deliveries.

The last two overs for Sussex were crucial, as they needed to score 20 runs. The wicket of Pujara was taken by Oliver Hannon-Dalby off the first delivery of the 49th over. The removal of Pujara put a stop to the pursuit of Sussex, which resulted in the team being limited to 306/7.

Cheteshwar Pujara played his heart out for Sussex, but the team was unable to prevail against Warwickshire and lost the match. The outcome may have been different for Sussex had the Indian batsman been able to maintain his position at the crease for one more over.

The squad that Pujara plays for is currently in second place in the competition after earning four points from their first three games. In terms of the overall competition, Sussex is still in a position that bodes well for their chances. Cheteshwar Pujara performed at a high level for Sussex during the whole county championship.

Pujara defends a ball as a 10 year old, signifying Test greatness to come.

Pujara plays across the line and almost sweeps a fast bowler in this clip.#Cricket died somewhere in the middle of these two sentences.

Are you sure it's not the highlights of his entire innings ? 😅

I know a guy with same name, but plays totally differently. 🤔

Needed him in the T20!! He’s doing great today as he has all season, so lucky to have him!

All people behaving like Pujara can't even hold the bat in white ball. He has a T20 century bruh.

even Pujara can bash these County Farmers 😭😭😭

He's looking so awkward hitting all these shots 😭