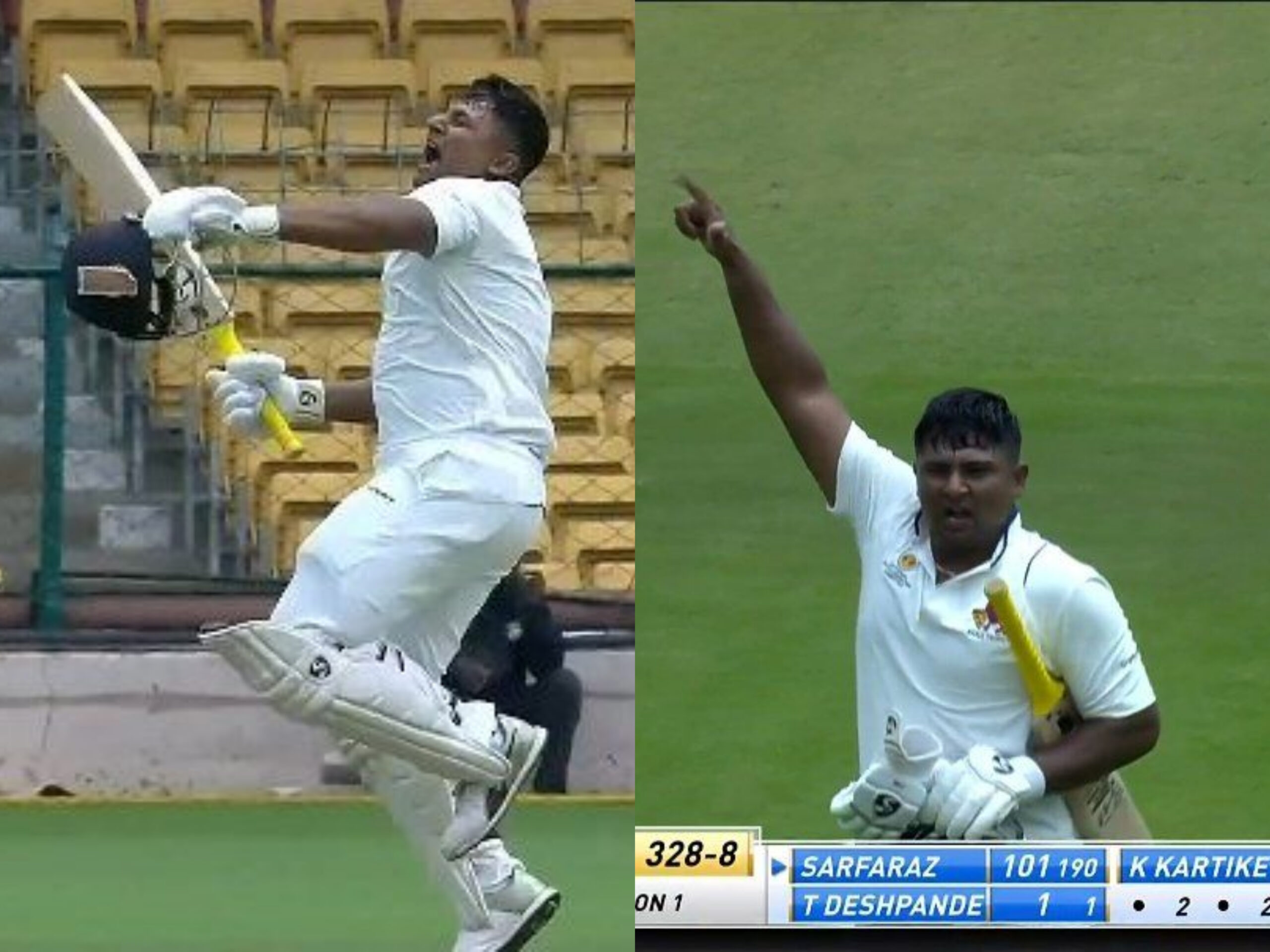 Sarfaraz Khan has produced another phenomenal innings for Mumbai, this time in the Ranji Trophy finals against Madhya Pradesh. He is currently batting on 119 off 224, and was almost single-handedly responsible for Mumbai crossing 300 in the first innings. After the first session of day two, Mumbai are 351-8.

This has been a superb knock in the all-important summit clash. 👌 👌 #Final | #MPvMUM | @MumbaiCricAssoc

This morning, he reached his century off 199 balls – the joint-slowest hundred for him in FC cricket – while wickets continued to tumble around him. Prithvi Shaw (47) and Yashasvi Jaiswal (78) were the stars of the first day, and Suved Parker’s wicket brought Sarfaraz to the crease at 147-3.

Sarfaraz batted alongside Jaiswal, but once the 20-year-old fell, the rest of the Mumbai batters began a slow but steady progression back to the hut. Hardik Tamore, who replacedthe injured Aditya Tare in the quarterfinals against Uttarakhand, was dismissed for 24.  Sarfaraz however batted on like a rock.

Sarfaraz has been streets ahead of the other batters in the league. In this season, he has scored one double hundred and two 150-plus scores. With 922 runs from just six innings including the ongoing match, he averages 153. He’s also racked up one double ton (275 against Saurashtra), three hundreds (153 against Uttarakhand, 165 against Odisha, and his 119 not out today against Madhya Pradesh today), as well as two fifties. Now, it looks as if he’s well on his way to surpass his own career best tally in a Ranji Season, his 928 runs from the 2019-2020 season.

If India 'A' were playing anytime now, Sarfaraz Khan would be among the first 2-3 names on that team.

After 24 first class games, Sarfaraz Khan is averaging 81 and counting. Has hit 8 hundreds, latest in the Ranji final. It’s highest FC average since Sir Don Bradman for someone with over 2000 runs. If that’s not good enough to get an India call up, tell me what is! #RanjiFinal

Sarfaraz Khan has played the most important knock of his career so far. On this track Mumbai will take 350 anyway
#MUMvMP #RanjiTrophyFinal

Unreal Sarfaraz Khan. Another day, another century for him. Top player 🔥🔥💯#RanjiTrophyFinal

What started with a 401-ball 275 against defending champion Saurashtra in the first league game has come a full circle with a hundred in the final.

Sarfaraz should get a chance in Red Ball when he's in such red hot form. Seems to have extraordinary hunger for runs.

‘United can write a book on how not to do transfers’ – Fowler shames Man Utd’s transfer policy
‘6ixty will be fun, but won’t replace proper cricket like The Hundred’ – hilarious Twitter reactions to CPL’s 60-ball league