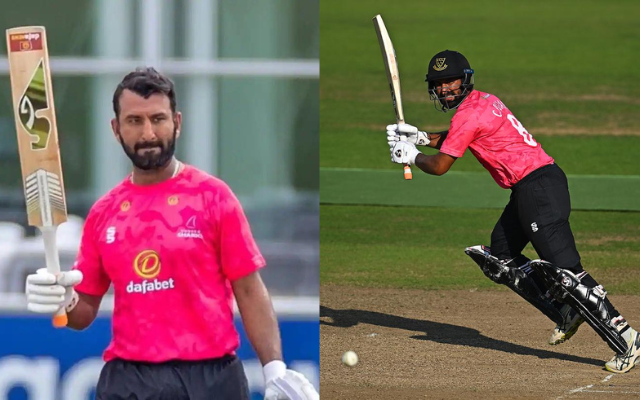 On August 14, 2022, ace Indian batter Cheteshwar Pujara, who is captaining Sussex in the ongoing Royal London Cup 50-over tournament in England, hit his second consecutive century and slammed his List-A best score of 174 in just 131 balls while playing against Surrey. He did this while setting a new record for the fastest List-A score.

Both of Sussex’s openers, Ali Orr and Harrison Ward, were dismissed for scores in the single digits after Surrey skipper Ben Geddes won the toss and decided that Sussex would bat first.

Then, Pujara and Tom Clark, who scored 104 runs and had 13 fours between them, contributed 205 runs for the third wicket as Pujara continued to run amok against the Surrey bowling. Pujara has maintained his fine form here as well, building on his last performance against Warwickshire, in which he hit 107 runs in only 79 balls.

Cheteshwar Pujara is balling in the Royal London One-Day Cup

It took him 103 balls to reach the 100-run milestone, and he finished with 174 runs in 131 balls, with 20 fours and 5 sixes. This is also his greatest score on List-A; his previous best was 158*, so this score beats that. It’s interesting to note that he scored his last 74 runs off just 28 balls, and he contributed to Sussex scoring 378/6 in 50 overs at the Hove County Ground.

Cheteshwar Pujara now has a 91 average and a 120 strike rate in 5 innings of the Royal London One-Day Cup. He is really putting on a show and displaying a new dimension to his game. Fans knew him as a classic test batter, but now the man himself is displaying to the fans the other side of his game. Pujara is batting at a fast tempo, and his sudden change of acceleration during his inning has also been evident in the Royal London One-Day Cup. Long, may this continue for Pujara!

Knocking the door for ODI selection? But at what number? Although, I don't suppose he can make it in the playing XI

Bashing farmers will not give him place in Indian team (2)

Reinventing oneself to play franchise cricket in the future 👆

He has average of 55 in his LIST-A career 😮‍💨 Someone actually said it right if you can conquer test cricket then it’s easy for you to play different formats as it helps you to get better in your skills.

What should i do
These are useless run

He has shown results in the test format,now he is eyeing the odi world cup👀