‘And For India, He Takes 175 Balls To Score 50, And Gets Out’-Fans React As Cheteshwar Pujara Notches Up 3rd Double Century In This County Season For Sussex 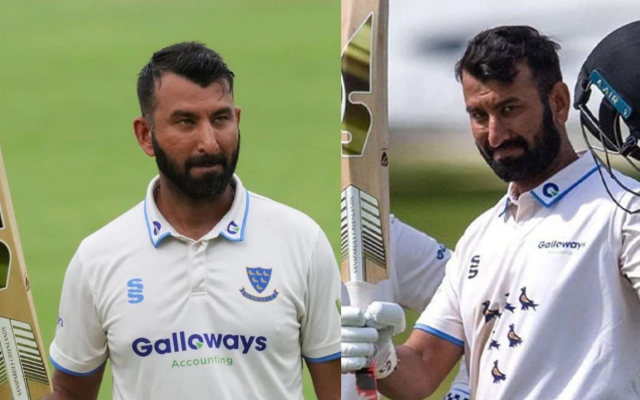 During this season of the County Championship, Indian batsman Cheteshwar Pujara is performing at an entirely new level. A day after scoring his fifth century of the season for Sussex, India’s Test specialist went a step further and turned it into a double century. At the Lord’s Cricket Ground, Pujara hit a respectable 231 runs off a total of 403 balls while playing against Middlesex. After he got out, the crowd at the famous stadium made it a point to let the Indian batter know how much they liked and valued his performance.

As soon as Pujara flicked the ball on the on-side to achieve his double century, his colleagues on the balcony jumped up and cheered his performance. When Pujara flicked Tim Murtagh to hole out in the deep, the whole stadium rose to its feet to cheer one of the most impressive innings that any of the spectators had ever seen.

The cameras in the Lord’s hallway did not capture the warm welcome that Pujara got, but the stadium’s Instagram page did, and it published a few photographs to highlight the same thing. “Cheteshwar Pujara finished his innings at Lord’s with a score of 231. An innings not to be forgotten,” the post read. Harbhajan Singh, a former India spinner and Pujara’s colleague, left a comment on the page in which he congratulated Pujara and stated, “Well done, Pujara.”

Cheteshwar Pujara notches up yet another double century

Pujara began Day 2 on 115 and had advanced to 143 by the time lunch was served. He got his score of 150 after facing the Middlesex bowlers for a total of 100 overs. After lunch, he made a brief transition into an offensive stance, during which he hit leg-spinner, Luke Hollman, for six over the midwicket region. Except for this flourish, it was a stately advancement. Even when India teammate Umesh Yadav bowled a tight stint down the hill from the pavilion end in the afternoon, including a few short balls, Pujara remained unscathed.

When Pujara reached the score of 200, he lifted his bat to thank the adulation that he was receiving from the Member’s stand as well as the other spectators. Even though he has done this many times before, he concluded with a score of 231, and he must have appreciated both the innings (403 balls, eight hours) and the occasion. Pujara’s appetite is so great that even a day spent batting was enjoyable for him on this occasion.

Why can't Kohli play County cricket? It will give him a lot of confidence and a better mindset

Though not comparing, he has filled the vacant space of current Indian coach , keep it up Pujara

He is the gem of India. A soft spoken, well mannered gentleman. Does let his bat do the most of the talking !!!!

A privilege to have seen 2 of the double 💯 s this season. A master at work.

Not played required knock for Last test match in England.