‘You Expect Him To Say Cristiano And Zlatan Infront Of Man City Fans?’-Fans React As Erling Haaland Changes His Idols During Manchester City Presentation 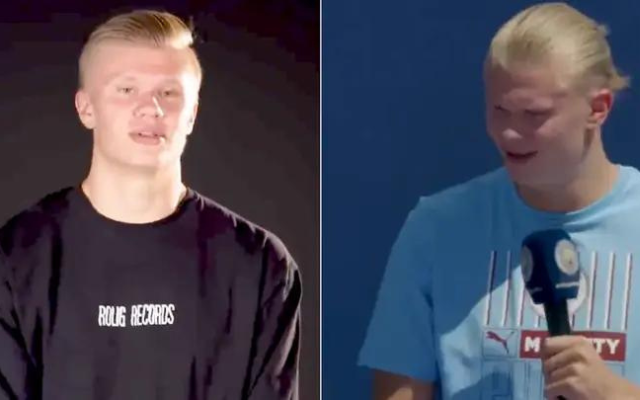 Erling Haaland has shown his true colors by completely changing his mind about who he looked up to as a child now that he plays for Manchester City.

Since Haaland moved from Borussia Dortmund to the Premier League for £51 million this summer, fans can really start to look forward to seeing him in person.

The Norwegian striker was officially introduced to the fans outside the Etihad Stadium on Sunday afternoon. This is a move that seems more common on the continent.

The 21-year-old took an early chance to poke fun at Manchester United, which was about as popular as Mick Foley saying the name of the city WWE was performing in on any given night in the early 2000s.

Haaland was also asked which players he looked up to as a child. He told the crowd that Sergio Aguero, a City legend and an Argentine forward, was his hero. He said he even had Aguero jerseys.

But someone has put together the footage from Sunday with an interview he gave at Dortmund in which he said that Cristiano Ronaldo and Zlatan Ibrahimovic were his heroes.

It would have been impossible for the former Red Bull Salzburg striker to stand in front of his new fans and say that a former United striker and a current United striker were his heroes, but that doesn’t stop it from being funny.

So it’s no surprise that the new City striker can’t wait to play their local rivals, especially if it means facing Ronaldo as long as he’s still there.

Ronaldo’s future at Old Trafford isn’t clear, though, because the 37-year-old player has told the club he wants to leave to play in the Champions League next season.

At a press conference during the team’s summer tour to Thailand, the new manager, Erik ten Hag, seemed sure that the striker would stay at Old Trafford. However, Chelsea manager Thomas Tuchel has not ruled out a move for the striker.

The Premier League champions showed off more than just Haaland, who was recently seen playing soccer on a beach with some young fans.

Julian Alvarez, a forward who used to play for River Plate, was also being shown to City fans for the first time. He didn’t get as big of a cheer as his fellow new signing, though.

Fans were even made fun of by fans of other teams because the atmosphere when the Argentina forward arrived was not very exciting.

People here acting like Aguero is some slumdog footballer. This man has the highest goal in EPL history for a single club with the highest strike rate as well. It will take Haaland years to emulate what Aguero has done. A striker can have more than one idols.

So what was the first question? I don’t think he was asked about his idols 🤷‍♂️

imagine having aguero as your idol 😭😭

The question was "which player from City did you idolise"

he clearly says "from city". dont think zlatan or ronaldo ever played for city