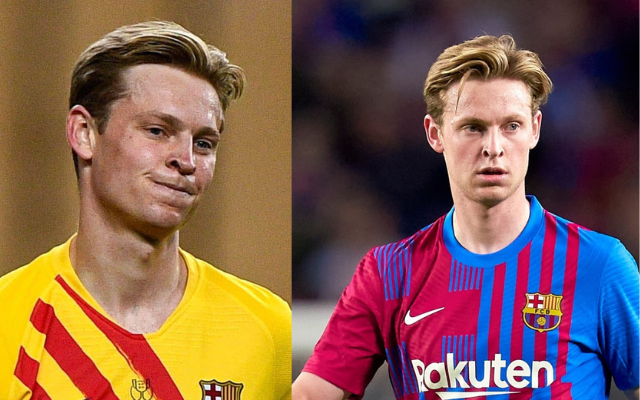 Frenkie de Jong is a Dutch footballer who primarily plays as a midfielder but has also played as a center-back throughout his career. He joined Spanish giants Barcelona in the 2019 summer transfer window for a fee of €75m from Dutch powerhouse Ajax after starring in the 2018-19 Champions League for the club from Amsterdam.

He has been in the news recently as the subject of a protracted transfer saga between Barcelona and Manchester United — and more recently, Chelsea. The transfer saga has also highlighted Barcelona’s financial issues as de Jong’s salary and the amount that he agreed to defer following the pandemic has been put on the spotlight.

What is Frenkie de Jong’s salary?

According to the website Capology, Frenkie de Jong’s salary is €560,962 per week (gross). However, there are some complications here. After the pandemic hurt Barcelona’s finances, he agreed to defer €17m. He signed a two year extension at the time that would keep him at the club till 2026.

This meant that his annual salary of €14m had dropped to €3m for the 2020-21 season and €9m in the 2021-22 season. It’s become a matter of dispute because clubs like Manchester United and Chelsea are hoping to buy him from Barcelona, who are not willing to pay the part of the salary that he agreed to defer but are splashing lots of money on the mega transfers of Robert Lewandowski, Jules Kounde and Raphinha, to name a few.

Much is still up in the air with the end of the 2022-23 summer transfer window likely to provide clarity on how this saga will end and if Barcelona will face any consequences for their expenditure.

What is Frenkie de Jong’s net worth?

According to most sources, his net worth is around €12m. He’s one of the biggest stars in the Dutch national team, who have qualified for the 2022 FIFA World Cup and plays for FC Barcelona, who are one of the biggest sporting institutions in the world. He’s also quite young and marketable.

Frenkie de Jong wears the number 21 at Barcelona. He wore the same number at Ajax once he started making appearances for the first team. He wears this number as a tribute to his late grandfather, whose birthday is on 21 April.

Where is Frenkie de Jong from?

Frenkie de Jong is from Gorinchem, which is a city in South Holland. He came from the youth system in Willem II, which is located in Tilburb, also in the south of Holland. He has also lived in Amsterdam and Barcelona.

What is Frenkie de Jong’s age?

Frenkie de Jong is 25-years-old. He hasn’t shown the promise from his Ajax days consistently since his move to Barcelona but remains one of the key players in the Dutch national side, who have qualified for the 2022 FIFA World Cup in Qatar.

He’s still quite young and and has many years left in him. Despite being one of the younger players at club and for country, he has always played with a lot of authority as is expected of midfielders.

Which clubs has Frenkie de Jong played for?

De Jong is often mistaken as a true Ajax graduate but started his professional career at Willem II. He also made his Eredivisie debut at the club before being purchased by Ajax in 2015. After impressing with his performances for Ajax in the 2018-19 Champions League, a whole host of Europe’s top clubs were looking to purchase him. He agreed to sign for Barcelona and has been at the club since 2019.

‘India is a country that has a special place in my heart’-Rogerio Ramos speaks after being appointed as the new Goalkeeping coach of Mumbai City FC
Real Madrid Schedule 2022/23: Full La Liga Schedule, Key Matches, Where To Watch, and Match Tickets