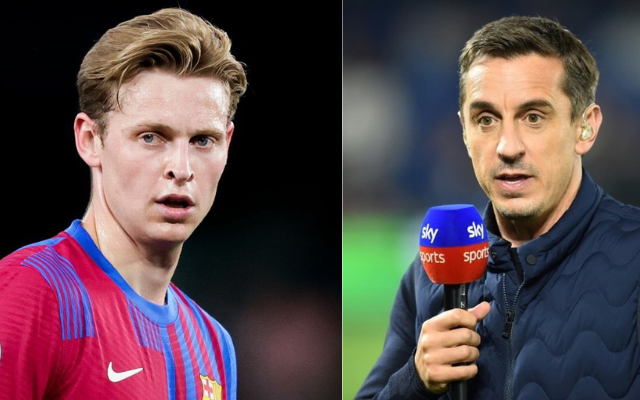 Gary Neville, a former player for Manchester United, alleges that he was informed by a third-party source that Frenkie de Jong would rather remain at Barcelona or move to Chelsea than make the move to Old Trafford.

Sky Sports has stated that Chelsea is attempting to hijack the deal to get the 25-year-old midfielder from the Red Devils this summer. The Red Devils have been heavily linked with the player throughout the summer.

Following his transfer from Ajax to the Blaugrana in 2019, De Jong has already racked up 140 appearances for the club. After Xavi Hernandez was named Barca’s new manager in November of 2021, the international player from the Netherlands was immediately elevated to a pivotal role in the club’s three-man midfield.

The Catalan giants spent £77.4 million (according to Transfermarkt) to acquire the midfielder, who has four more years remaining on his present contract. On the other hand, Barcelona’s financial situation is notoriously precarious at the moment, and there is growing talk that a major club from the Premier League may secure his contract this summer.

What did Gary Neville say about the Frenkie De Jong saga?

In reaction to the report that was published by Sky Sports, the former captain of Manchester United made a claim that he was provided with some information in Miami that would substantiate the report. On Twitter, the commentator tweeted the following:

“I was in Miami when Barca was there playing two weeks ago and I got told ( third hand ) De Jong preferred staying at Barca or Chelsea and London. Wasn’t a concrete source but this follows that thought.”

I was in Miami when Barca were there playing two weeks ago and I got told ( third hand ) De Jong preferred staying at Barca or Chelsea and London. Wasn’t a concrete source but this follows that thought. https://t.co/UQd8G69sSj

The newspaper The Mirror claims that Manchester United is not giving up hope of bringing the Dutch player to Old Trafford this summer.

According to the article, Ten Hag also conducted a phone conversation in an effort to persuade the player to participate in his new project. De Jong would also be an unquestioned starter, a position that is comparable to the one that was granted to him by Ten Hag when he was at Ajax.

The Dutch combo had a lot of success together when playing for the Dutch giants, and in 2019, they came within seconds of making it to the final of the Champions League. The failure of Manchester United to qualify for Europe’s top club tournament for the following season is the primary impediment to the completion of the trade.

It seems doubtful that a player of De Jong’s calibre would be satisfied with playing in the Europa League, which may provide an opportunity for Chelsea to make a move. Despite this, Ten Hag has asked that the higher-ups at Manchester United do all it takes to ensure that the deal is finalized, regardless of how much time it takes.

‘Who has been forced to deal with such challenges?’-Graeme Souness comes out in support of Chelsea manager Thomas Tuchel
‘He was too accustomed to Germany’- Sergio Aguero shares his view on the below par performance of Erling Haaland against Liverpool