Getafe Vs Real Madrid Betting Predictions, Where To Watch?

Getafe vs Real Madrid will favour the visiting team, who are the team at the top of the La Liga table now. 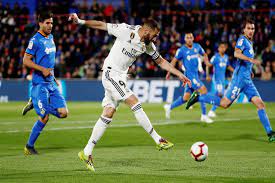 Getafe vs Real Madrid, where to watch?

Aside from Sabit Abdulai, who will miss the game via injury, Getafe will also be without Djene Dakonam, who will miss the game due to suspension. Jose Macias, Vitolo and Chema Rodriguez are also doubts for the match. Dakonam’s absence will provide an opportunity for Erick Cabaco to make his debut, while the hosts also have another attacking option in the form of Jaime Mata, who has returned to the squad after a suspension.

There aren’t likely to be many surprises in the starting lineup for the home team, with Sandro Ramirez and Enes Unal set to return to the attacking third of the field, while Carles Alena is expected to keep his place in the midfield.

In terms of Real Madrid, Dani Carvajal is a doubt for the match due to injury, while Vinicius Junior, Luka Jovic, Eduardo Camavinga, Federico Valverde, and Thibaut Courtois have all recently tested positive for the coronavirus, according to reports. The fact that Courtois, Valverde, and Camavinga have purportedly tested negative, there is still a potential that Courtois and Valverde will be included in the team. Camavinga, on the other hand, will be absent due to his ban.

Rodrygo, Marco Asensio, and David Alaba are among the players who have returned to training after their virus-related absence, and it would not be surprising to see Rodrygo and Asensio play with Karim Benzema in the final third of the field.

At the weekend, Real Madrid will be attempting to secure their 15th La Liga win of the season, and we are finding it tough to place bets against the La Liga leaders. Even if Getafe has shown signs of progress in recent weeks, the host side might fall up just short against Ancelotti’s team tonight.