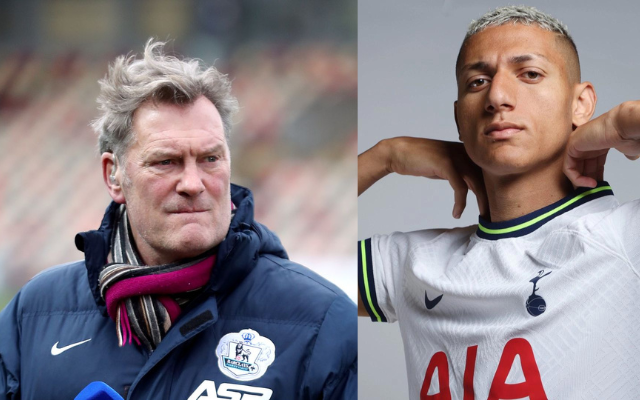 Glenn Hoddle has said that Richarlison will not start for Tottenham Hotspur when they take on Chelsea on Sunday in a matchup that will take place in the Premier League.

After Tottenham Hotspur kicked off the new season with a 4-1 victory against Southampton, a Spurs veteran said that Richarlison “needs to find a way to sneak into Antonio Conte’s starting XI for Chelsea.

Even if Harry Kane and Son Heung-min did not score or provide an assist over the weekend, no one on the squad is gaining ground on the record-breaking combination.

The only opportunity Richarlison has to secure a starting role is to outperform Dejan Kulusevski, who joined the team in January. However, the 25-year-old has a challenge in the sense that Kane and Son are both producing at a high level.

Over the weekend, he followed up where he left off with his exploits from the previous season by scoring and assisting throughout the game. This helped Conte’s team come from behind to secure three points against the Saints in a decisive victory.

Now, it’s a trip to Stamford Bridge this weekend, and Richarlison will return to the team that will make the short journey across London. However, Hoddle doesn’t believe that he gets thrown right in, as he told Premier League Productions.

What did Glenn Hoddle say about Richarlison?

Hoddle responded by saying that Richarlison will take the place of anybody at this time.

“I believe that side (who participated in the match against Southampton) will start against Chelsea. They have worked hard enough to deserve that privilege. Richarlison will need to figure out a solution at some point, and the onus is now on him to do it. He’s outside gazing in. Because he was serving a suspension, he wasn’t even allowed to be on the bench (against Southampton).

However, he is probably thinking to himself, “I can’t wait to go out there and play. No disrespect to Everton, with better players, I will get better.

However, his standards now have to be at constant levels and they have to be right up there, and Conte has accomplished this in a very short amount of time. The players that he has recruited to play for Tottenham, each of whom will contribute to the team’s overall improvement, will be between eight and nine points out of 10. And now that there is competition, it makes it an exciting time for Tottenham moving ahead,” he said.

Even though it is just the second week of the new season, it already seems like a major game has come, as Chelsea and Spurs are scheduled to square off against each other at Stamford Bridge.

During the previous campaign, the team managed by Thomas Tuchel had the upper hand over their competitors, as they were victorious against them both at home and on the road in the Premier League and also eliminated them from the League Cup.

But now that the new system is in place, Conte has a different lineup, and a lot of the present stars have a much easier time finding their footing as a result of the change.

Not to mention the fact that he has a far stronger bench, which may include players like Richarlison, Yves Bissouma, and Lucas Moura.

In any case, it seems like it’s going to be a delicious event that, moving forward, might have a significant effect on the squad that emerges victorious.

‘World’s best run-machine across 3 formats’ – Twitter reacts as Virat Kohli’s rating improves to 663 after the fifty in the T20 World Cup semi-final
“After Shastri vs Ganguly, now Shastri vs Dravid has started”, Twitter reacts as Ravi Shastri says that he does not support breaks for coaching staffs