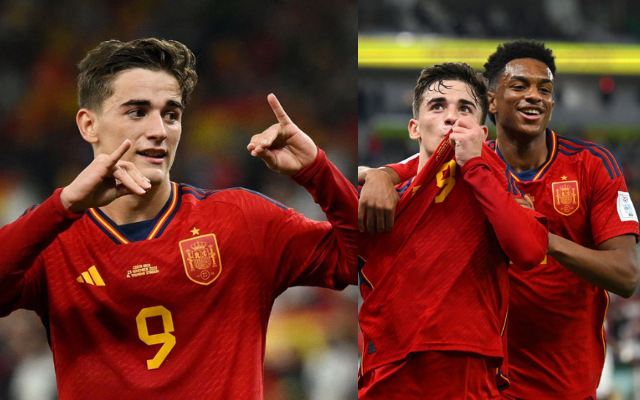 Gavi, a midfielder for Barcelona, made history on Wednesday against Costa Rica by scoring Spain’s sixth goal in the tournament opener for them. After 74 minutes, after a cross from Alvaro Morata, the then-18-year-old scored the game-winning goal and etched his name into football lore.

Gavi has emerged as a key player for both club and country despite just turning 18 in August. He has also been recognized for his outstanding debut, winning both the Kopa Trophy and the Golden Boy Award in 2022.

If he wins the World Cup with Spain, wouldn’t it be impressive?

The victory was Spain’s first-ever opening-game victory in a World Cup. Gavi, one of two adolescents to start the game, was the youngest goalscorer in team history at age 18, while Ferran Torres scored their 100th goal in tournament history. Two of Spain’s six scorers, their total of seven goals was so impressive it had to be spelt out on the vidiprinter to prevent any misunderstanding.

They took 16 shots but gave up none, resulting in seven goals. It was only fitting that Carlos Soler, after scoring the game’s last goal in the 92nd minute, pointed and winked to signify that “we’re here.”

He and Pedri, the graceful soaring 20-year-old who turns 20 this coming Friday, dominated the competition. But then the whole Spain team did, and they were really convincing as a unit. Sergio Busquets kicked the ball, and it continued ricocheting off his boot and landing just where he intended it to; there was no need for it to linger any longer.

It's unbelievable that both Gavi and Pedri are undisputed starters for both club and country considering how young they're. https://t.co/mkQq75vlAx

Golden Boy for a reason 👏🏿✨ https://t.co/mMHeLvbjvR

What a player
Came into both Barcelona and Spain at 17 with a lot of competition and never looked fazed
Showed what he’s got and made himself a starter
Gets trolled and criticized but still shows his quality
Love him to bits ⭐️ https://t.co/vT1espAz7W

“Man deserves an India call-up now”, Twitter reacts after Sarfaraz Khan hits a surreal century against Railways
“He has done wonders for the Team…..”, Former player comes up with big words for Virat Kohli