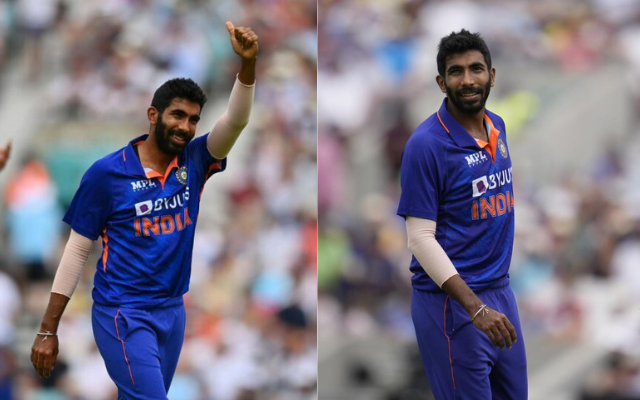 The forthcoming edition of the T20I World Cup 2022 is less than a month away from getting underway. The tournament will be held in Australia from October 16 onwards.

Aaron Finch-led Australian cricket team made it all the way to the finals of the last edition of the T20 WC. They got the better of Kane Williamson-led New Zealand cricket team to win their maiden title.

In what comes as a shocking update to Indian cricket fans, Team India pacer Jasprit Bumrah has been ruled out of the upcoming edition of the T20 World Cup 2022 due to a stress fracture.

This is indeed a massive blow to Team India’s chances going forward into the marquee event in Australia. Earlier, the right-arm fast bowler was ruled out of the Asia Cup 2022 tournament in the United Arab Emirates.

India clearly missed his services in crunch situations of the game. They failed to defend totals in the Super 4 stage games against Pakistan and Sri Lanka respectively.

He played two T20Is against Australia recently but didn’t feature in the first T20I against South Africa. However, now, it’s been official confirmed that he will no longer take part in the marquee event. A BCCI official, on the condition of anonymity told PTI that Bumrah sustained a stress fracture and could be ruled out of cricketing action for months.

“Bumrah is not going to play the World T20 for sure. He has a serious back condition. It’s a stress fracture and he could be out for a period of six months,” a senior BCCI official told news agency PTI on conditions of anonymity.

Jasprit Bumrah ruled out of T20 World Cup due to back stress fracture.

How does he never get injured while playing in ipl?

Indian Cricket fans Are worst. Every now and then it's being proved by these type of tweets

I think so, his short run puts a lot of toll on his back. Micheal holding talked about it in 2018 and he was bang on.

And his unorthodox action too. He generates lot of pace from his upper body, which is not good for long term prospects.

Only way is to bat and score nearly 300 runs and then choke the opposite team out. Arshdeep is a good bowler… Let's see how it goes!

So We are losing another WC 💔

‘Best replacement for Bumrah 🤪🤪’-Twitter reacts as Irfan Pathan, the finisher of India Legends hit 37* runs from just 12 balls including 5 sixes and 1 four
‘Even his fans didn’t know about this’-Twitter reacts as Rohit Sharma becomes the first Indian to play 400 matches in T20 history