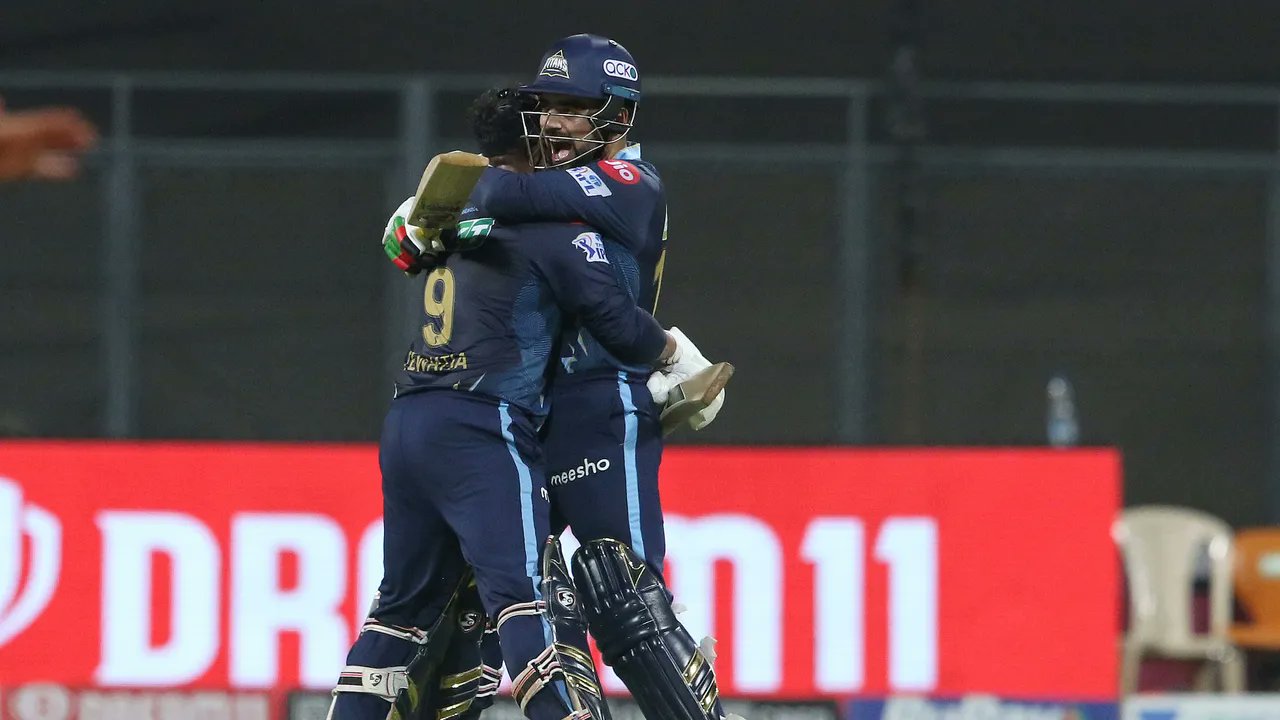 Rahul Tewatia and Rashid Khan starred for the Gujarat titans as they pulled off an unbelievable win against Sunrisers Hyderabad. Both remained undefeated after plundering 25 runs off the final over to propel GT to victory with five wickets to spare.

Natarajan and Bhuvaneshar Kumar gave away 34 runs between them across the last three overs at an economy rate of 3.1, quite reasonable considering the required run-rate was 14. But Marco Jansen went to pieces in the last over of the game. SRH needed 22 off the last over to win, and Tewatia understood the assigment. He whacked a six over long-on, and then ran a single to hand over strike to Rashid Khan – who then proceeded to desposit Jansen out of the ground three more times, with the winning runs coming off the last ball to a high six over fine leg.

GT’s innings was setup by the industrious efforts of Wriddhiman Saha. His 68 off 38 balls included 11 fours and a six, a glorious return to form after his two difficult innings in the previos matches. Shubamn Gill was the first to fall, getting his stumps knocked over by Umran Malik right after the powerplay. However by that point GT already 69 for none, and despite Umran Malik steadily chipping away at the wickets at one end, the batters who came in kept the required run rate under control.

Malik, the only wicket taker for SRH finished his spell with the sixteenth over. He removed Abhinav Manohar and David Miller cheaply , and GT’s last hopes were pinned on the two still batting at the crease. And once again, they delivered. Tewatia and Rashid together plundered 50 runs off the last four overs, and their partnership remained undefeated on 59 runs off just 24 balls.

Tewatia delivered 40 runs off 21 balls, including foru fours and two sixes at a strike-rate of 190. Rashid’s innings was of a more simple nature, his 31 runs off 11 balls coming almost exclusively off four huge sixes.

What Rahul Tewatia and Rashid Khan did is very difficult. This is high quality finishing

The season Tewatia finishes Punjab he soon follows it up with SRH
2020: They needed 54 off the last 4.
Today it was 56 off the last 4.
Tewatia ended not out in the 40s both days.
Had Parag that day to support him that day who sealed it off with a 6. Rashid did the same today.

Lol Tewatia, Rashid have mastered art of finishing tough and impossible chases all by themselves. 22 off 6 is unbelievable.

Tewatia, bdw, is raising his stakes higher. Amazing temperament as a batter. #GTvsSRH

Can't believe how GT just managed to win games like these with literally no contribution from either Gill or Hardik while chasing. Tewatia has now contributed in 3 games, Miller and Rashid in 2 wins. This team is built differently.

Gujarat Titans with another daylight robbery! Some hitting by Rahul Tewatia and Rashid Khan. GT on a roll! #IPL2022 #SRHvGT