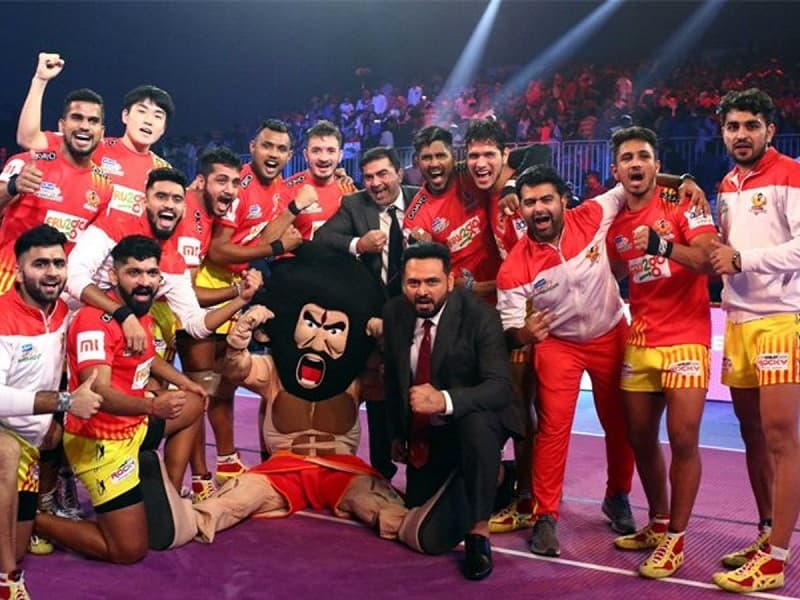 Kabaddi is a sport that is played in rural parts of India. Later, in 2014 it was launched at a professional level named as Pro Kabaddi League. Check Gujarat Fortune Giants Team 2021 Players List, Owner, Captain, Stadium, Fixtures.

The 12 teams play each year in the League and battle through victory. The game follows the same rules like kabaddi with a few additions. Pro Kabaddi had 7 enthusiastic seasons, and fans are expecting the same this year.

Gujrat Fortune Giants is one of the franchise teams that features in Pro Kabaddi league. The team is based in Ahmedabad, Gujrat. The Giants has performed brilliantly, as they made through semi finals in 2017 & 2018. However they were defeated in both years. So check out the formation and details like Gujarat Fortune Giants Squad 2021, Owner, Captain, Stadium, And Fixtures.

Gujrat Fortune Giants was established in the 2017, Season 5 of the Pro Kabaddi League. It proved to be the wild card team in its debut seasons, by reaching in the finals. The teamwork within the players showed that they are both strong and smart. Here is the entire list of players along with the position each player is currently in.

Gujarat Fortune Giants 2021: Who is the Owner, Captain & Coach?

The team is owned by Adani Wilmar Ltd. Its a multinational conglomerate that deals with many diverse businesses like port management, mining, natural gas and so on. It is headquartered in Ahmedabad. the Team is led by the captaincy of Rohit Gulia. He is a fierce all rounder with his first match in 2017 PKL. He believes in the motto, Do-or- Die.

The teams is guided by the head coach, Manpreet Singh. The jersey colours of Gujrat Fortune Giants is red and yellow.

The Giants play they home matches on their home ground, EKA Arena by TransStadia. It is situated in Gujarat, with a capacity of nearly 20,000 seats. It was built in 2016. The Stadium is operated by the government of Gujarat.

The Gujarat Giants had their first season in the year 2017. Even after entering into the league later, the team showed all its might to win as many matches as they could. The overall matches won by them are 77 in 3 years. Just take a quick look at the statistics of the team.