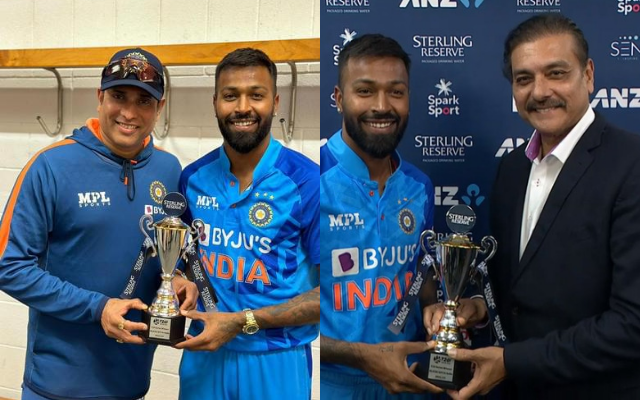 He led the team quite well in the T20I series and the result ended in favour of the Indian cricket team. The first T20I was abandoned due to rain and hence, we could not expect any result out of the game.

However, the second game went smoothly as per the schedule. Although there was an interruption due to rain, the match resumed soon after the rain stopped. Suryakumar Yadav went on to score his second T20I century, which was enough for India to post a competitive total of 191/6 in their quota of 20 overs.

In response, New Zealand were skittled out for 126 in the chase. As a result, the Men in Blue won the game by 65 runs to take the first lead in the series. Although the second game was totally a one-sided encounter, the third T20I was a tight contest as both teams gave it all to win the game.

Fortunately, for India, despite losing four wickets for 75 runs in 9 overs, they still managed to level the par score of 75. With no further play possible in the game, the match ended in a tie, meaning that India won the series by 1-0.

Hardik Pandya becomes the second Indian captain after Virat Kohli to win a T20 against New Zealand in New Zealand.

Currently he has led India in 5 matches on paper but has played only 3.5 matches and India has won all those 3.5 matches under his leadership. 2 against Ireland and 1.5 against New Zealand.

Rain Luck Otherwise It Would 1-1

Only bhuvi and chahal were the old guys

who cares about tinpot series
nz won many series in 2022

‘He will be the part of auction only’ – Twitter reacts as Joe Root expresses his interest to be a part of IPL 2023 mini auction
“He is an American”, Twitter reacts after Unmukt Chand becomes the first Indian player to get a Bangladesh Premier League contract