‘Have you ever seen Harshal Patel celebrating with aggression when he takes a wicket?’ – Twitter users divided over Harshal-Parag altercation 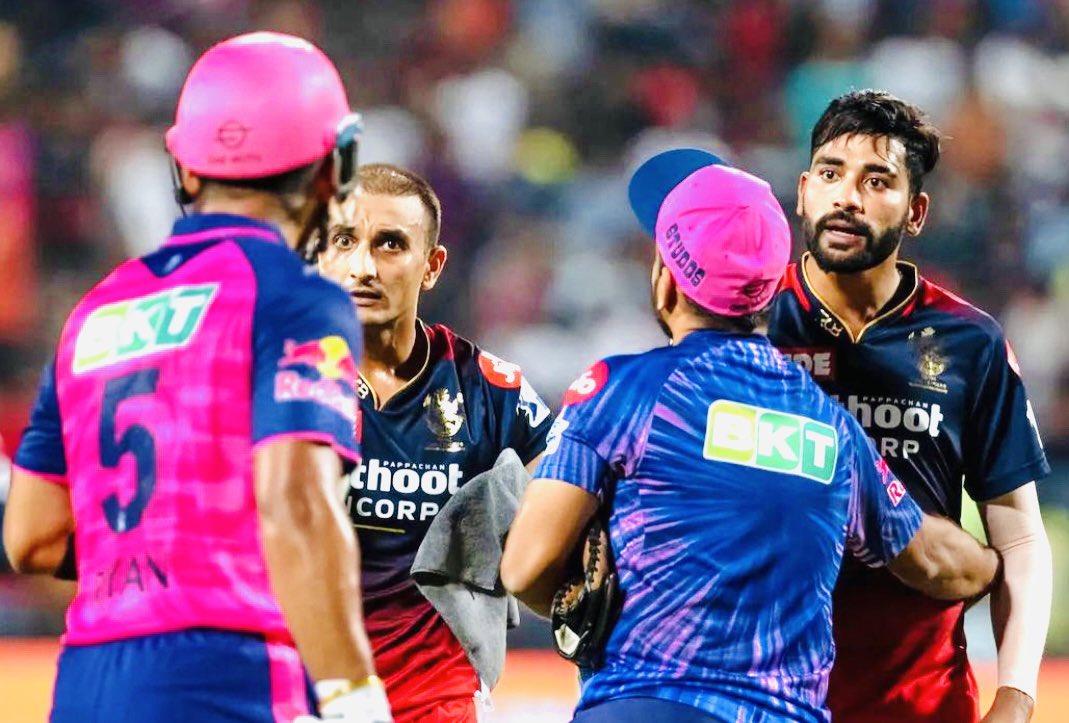 Riyan Parag starred for the Rajasthan Royals in their win over Royal Challengers Bangalore on Tuesday. The all-rounder’s unbeaten 56 off 31 balls took RR to a respectable 145-run total. But he draw attention on the field not just for his batting, but his altercation with RCB pacer Harshal Patel.

Parag smacked 18 runs off the final over of RR’s innings, which was bowled by Harshal, RCB’s trusted death bowler. He hit two sixes and a four, bringing up his fifty on the last ball with a huge six. Harshal had bowled extremely well up to that point, his first three overs conceding only runs as well as taking the wicket of Trent Boult. Parag seemed to be riding high on the emotions, and as the players prepared to move back for the innings break had a word with Harshal before walking off. Harshal didn’t appreciate the last-over battery by Parag, so he and Mohammed Siraj appeared to have a few words in exchange for the 20-year-old Assamese hitter

The argument was broken up, but the drama wasn’t over yet. RCB were bowled out for 115 in the final over of their innings. They needed 30 runs off the 20th over with RCB’s tenth-wicket pair at the crease, one of whom was Harshal. He was dismissed off the third ball, leaving RCB 29 runs behind. But as Harshal walked off the wicket, he walked right by Parag without offering his hand for the friendly team hand-shakes after the match.

Twitter users were divided between the intentions and actions of the two players. Some took Harshal’s side, believing that emotions were running high after the recent loss of his sister.

Guys stop throwing garbage at Harshal blindly. If he had any attitude issue he wouldn't have shook hands with other RR players. Remember last year when jaddu hit him for 37, he did shake hands with jaddu. Parag must have said something hurtful/below the belt. #think #HarshalPatel

Harshal Patel is one of the calm and coolest player , i never saw him celebrating aggressively except few times.We can't blame parag too it's heat of the moment but jobless people on twitter calling harshal arrogant , one season wonder, attitude are ridiculous and maybe they
2/3

You know what's funny to me is the fact the same people who are shamelessly trolling harshal, were the ones who used to wait for riyan parag to fail so they can troll him. But since he had an incredible game yesterday, everyone's is taking HIS side.

Have you ever seen harshal celebrating with aggression when he takes wicket? Expect when he took a hatrick ? When he was gone for 37 runs also he kept his clam. Parag surely said smtg here https://t.co/GKkeHKazG9

Saw so many tweets blaming harshal Patel because he didn't shake hands with riyan parag. The way you people held sportspersons accountable for showing their emotions and rage is beyond me. Never forget they are humans, not machines.

Others believed not sharing hands with Parag was a poor display of sportsmanship on Harshal’s part.

Harshal Patel is such an arrogant guy. Fought unnecessarily with Parag earlier and now refused to shake hands with him. But he will eventually get away with all these because his family tragedy will get him sympathy

I really dunno why are people shaming Parag for not shaking hands with Harshal when it was hum who didn't respond. Also, to those who are trying to say he lost his sister and he got emotional, well, he can take some time off. Also, he started the confrontation in 1st innings too.