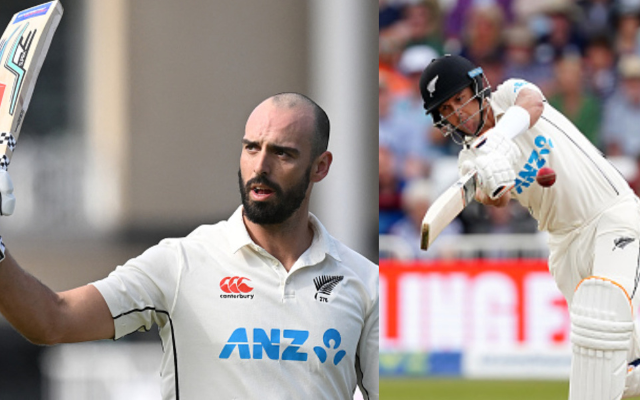 In the first innings of the second test match between New Zealand and England, which is currently being played in Nottingham on Saturday, New Zealand all-rounder Daryl Mitchell scored 190 runs against England. After hitting a magnificent century in the last innings of the first test, he maintained his outstanding form in the subsequent match. On day two, wicketkeeper-batter Tom Blundell also made a century, and then, after a 49-run performance by debutant Michael Bracewell, New Zealand was able to achieve a total of 553 runs while batting first.

While this was going on, Mitchell was dropped when he had scored only three runs, but he went on to score 81 runs by the conclusion of Day 1. After scoring his third test century during the first session of day two, Joe Root once again dropped him when he was playing on 104 runs. After that, he played more responsibly and even built a 33-run partnership with Trent Boult for the final wicket. He ended up scoring 190 runs before being caught out by Ben Foakes off Matthew Potts’ bowling. In the meantime, the 31-year-old batsman didn’t seem to be freaked out over falling short of his first double century and spoke about how he could contribute more to the success of the team.

“To be honest, it was simply wonderful to contribute to a score that can help us win a Test match. A personal century doesn’t mean all that much to me, but it was nice to contribute to a score that could help us win. Anything over a hundred is pretty good, so I was just trying to do a good job for the team, and it’s always good fun batting with (Trent) Boulty at the end there. He always provides a bit of entertainment.” Mitchell said.

“He wanted it,” Daryl Mitchell said of Boult’s desire to have a successful record

As was indicated before, Boult arrived on Day 2 at position number eleven to team up with Mitchell. In the first test match, he scored 18 runs, and in the second test match, he produced another tidy undefeated knock, scoring 16 runs off of 18 balls with the assistance of four boundaries. Boult has now equaled the global record held by Muttiah Muralitharan for the most runs scored by a batsman batting in the eleventh position in a game of Test cricket, which is 623 runs. Mitchell, who played with Boult for Rajasthan Royals in the Indian Premier League in 2022, said that the fast bowler was attempting to break this record and spoke about it.

“I’ve spent the past two months with Trent at the IPL, and I suppose he’s stated it every day, that he wants that record. I’m quite sure it’s going to happen. I believe that it is a remarkable accomplishment. Who knows? Maybe he’ll try to break the record for the No. 10 spot now,” Mitchell stated.

At $12m per match, IPL set to be 2nd most lucrative sports league in the world
‘The Same XI IN The First Three Matches’- Ashish Nehra Feels That There Is No Need Of A Change In India’s Playing XI