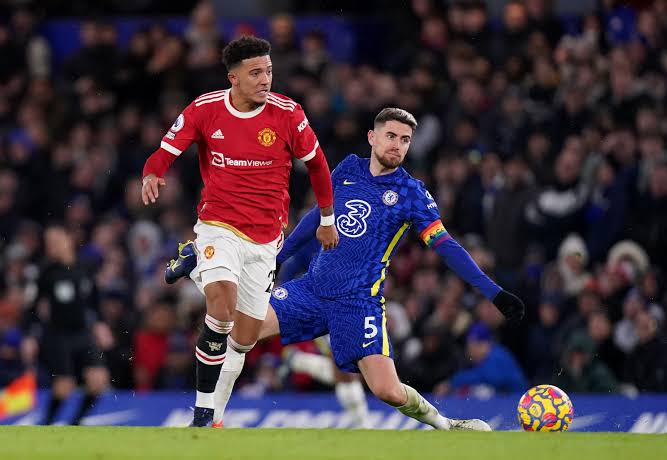 Manchester United managed a fortunate escape at the Bridge as a soft penalty from Aaron Wan Bissaka allowed Jorginho to restore parity after a sublime finish from Jadon Sancho.

Manchester United started the game on a wobbly note as Chelsea sniffed blood early. A surprising move from Carrick saw Ronaldo starting on the bench while United wanted to elicit the brutal pace from Rashford and Sancho.

There were categorical enterprises from the attacking outfit of Chelsea while the United defence that was divested of Maguire and Varane even before the game started, started weathering the early storm.

Despite Chelsea gaining a lion’s share of the possession, the solidity in the United back didn’t allow easy incursions to the defending European champions. To bolster the United rearguard in the opening half, David De Gea produced a number of fine saves that included tipping off a blazing effort from Antonio Rudiger.

The first half petered out to a draw while the second half saw a shift in momentum towards the visiting Devils. Chelsea got so involved in barelling the unbreakable defence of United that their defence was left open with Jorginho being the penultimate guard of the fortress.

Bruno Fernandes splashed a defensive effort that caught Jorginho napping and two of United’s fastest players were in hot pursuit. Sancho snatched the ball and Rashford maintained equal pressure with a blistering run alongside his national teammate.

Sancho remained glued to the ball, took perfectly-weighed passes, conjured a deft feint in the end and hammered the ball past an advancing Mendy.

It was a spectacle for the fans to behold, especially that dance in the last moment which made Mendy commit towards Rashford.

Even though Jorginho restored parity for Chelsea from the spot, fans were furious with the Chelsea skipper as he had no clue about Sancho with his eyes stuck on Rashford. More importantly, Sancho snatched the ball away from him with a flick of his feet.

Twitter was absolutely merciless in shredding apart the Italian midfielder for his unforgivable howler in a high-octane match like this.