How much does Karim Benzema earn per goal in 2022? | Benzema salary per week, biography 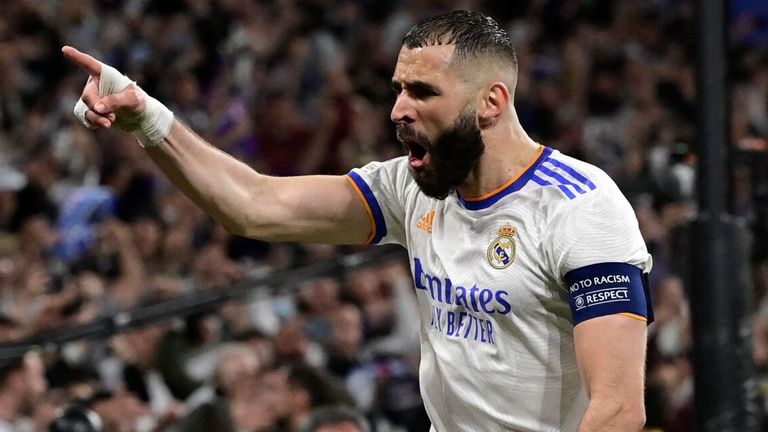 How much does Karim Benzema earn?

Football is a simple game: 22 men chase a ball for 90 minutes and, in the end, Real Madrid always win. Los Blancos have made it to yet another Champions League final after a late flurry against reigning English champions, Manchester City. The faces of this unwavering Spanish machine are changeable and Karim Benzema is the latest. Karim Benzema earns a steep price per goal but it’s one Florentino Perez has been happy to pay over the years. Earlier this season, Benzema’s salary saw a little increase after he was handed a contract extension that would keep him at the club till 2023. One wouldn’t balk if his Real Madrid salary gets a little bump in the coming months if he continues the exploits from recent months.

Karim Benzema’s legend among the Madridistas was preserved long before this season but this remarkable coda of his Real Madrid story is what will immortalize him to the larger footballing world. The 13-time European champions have a glorious history that has seen them encounter, confront and conquer every situation that the sport has to offer; yet the events from their 2021-22 Champions League campaign will leave even the most ardent and long-standing fans of the fabled club in awe of what they’re witnessing and Benzema’s been at the heart of it. There’s been an inevitability about this victorious white juggernaut since the conception of the European Cup in 1955.

A goal scorer, playmaker and battering ram rolled into one; the Frenchman played the Robin to Cristiano Ronaldo’s Batman for the most part in his 13 years at the Santiago Bernabeu but has become a leading act in his own right since the Portuguese’s departure in 2018. Never likely to be deified like the Galacticos of old, his is a different tale altogether.

Just like his role on the football pitch, his role in the story of the modern Real Madrid has also been ever-changing. He’s gone from rising star, scapegoat, cult hero, sidekick and adopted son, to the King of the Bernabeu. The Frenchman definitely earns like a king. According to the Football Manager database, one of the most in-depth ones in the world, Benzema earns €325k per week before tax. For a season, that would equate to €39m a year before tax.

Also read: How much does Cristiano Ronaldo earn per goal?

This season, the Frenchman has registered 26 goals and 11 assists in 30 La Liga appearances (as of May 5). His 37 goal contributions make up for 50.7% of Real Madrid’s 73 goals. Goals that have been significant in helping the the Galacticos clinch their 35th La Liga title.

His contributions this season have been more evident because he’s also on penalty taking duties. Penalties were previously the domain of Sergio Ramos and Cristiano Ronaldo for most of Benzema’s time at the Spanish capital. He’s also scoring goals at a fairly sustainable rate, with a non-penalty expected goal value of 0.52 per 90 according to FBref via Statsbomb.

If we are to divide his annual wages by the number of goals he has scored in La Liga, we find that Benzema has earned €1.5m per goal so far. But it’s another competition that has made the undertaking of honoring him with next season’s Ballon d’Or a mere formality.

How much does Karim Benzema earn per goal in the Champions League 2021-2022?

He’s also the only player other than Cristiano Ronaldo to have hit two consecutive hat-tricks in the knockout stages of the prestigious club competition but it’s the dramatic nature of the hat-tricks, the technique applied on some of the strikes and calmness under pressure that have made it look like such a singular effort. He has also provided two assists, including the one the one that kick-started the comeback against Manchester City in the second leg. Karim Benzema has raised the floor of a team that produces in moments. He is the moment.

If we are to divide his annual wages by the number of goals he has scored in the Champions League 2021-22 before the final, we find that Benzema has earned €2.6m per goal in the campaign so far, which is a cool 73.33 percent more than he has earned per goal in the La Liga this season so far. Of course, for the Los Blancos, these goals have been priceless.