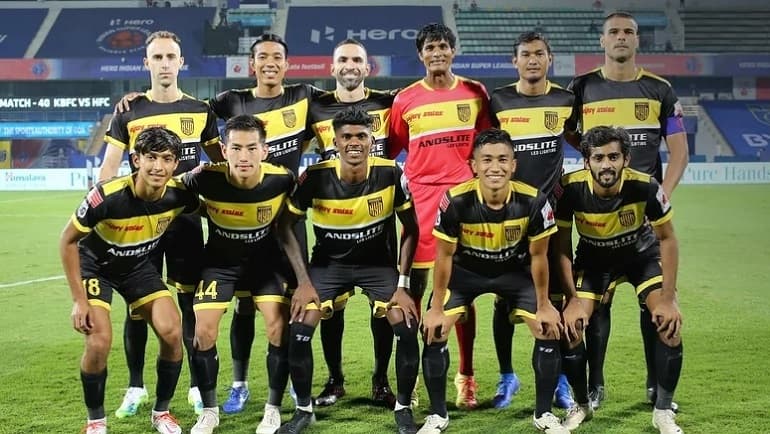 ISL is India’s biggest Football League. Hyderabad is one of the Clubs that play in the Super League. Check Hyderabad FC Players List of ISL 2021-22, Transfer News, Owner, Coaches, Captain, New Singing All You Need To Know.

Hyderabad FC is based in Hyderabad Telangana. Although it was recently formed in 2019, by replacing Pune City, it stands 10th on the scoreboard. They finished 5th in 2020-21 ISL following a draw against Goa.

The team has its franchising rights given to celebrities like Rana Dagabati, Varun Tripuraneni, and Vijay Madduri. The team is yet to make its mark in ISL You can check Hyderabad FC Transfer News, Owner, Coaches, Captain, Players List.

Meanwhile, some players were loaned In and Out of the Football club, the fees for which is not disclosed.

Players who got In :

Players that got Out:

Loan In & Out players

The head coach of the team is Manuel Marquez Roca who is a Spanish footballer. He was also a defender. Initially, Hyderabad FC joined the F.C. Barcelona as fitness coach under Ronald Koeman. Adil ahmd khan is currently the captain of the Hyderabad FC. He plays as a center-back and a defensive mid-fielder in football.

Who is the Owner of Hyderabad FC?

the Hyderabad FC franchise is sold to the 3 people in partnership. The partnership includes the popular actor, Rana Dagubati. Also, former CEO of Kerala Blasters Varun Tripuraneni, and Telangana businessman Vijay Madduri. All three owners are in a partnership with the franchise.

What is the Jersey kit of Hyderabad FC?