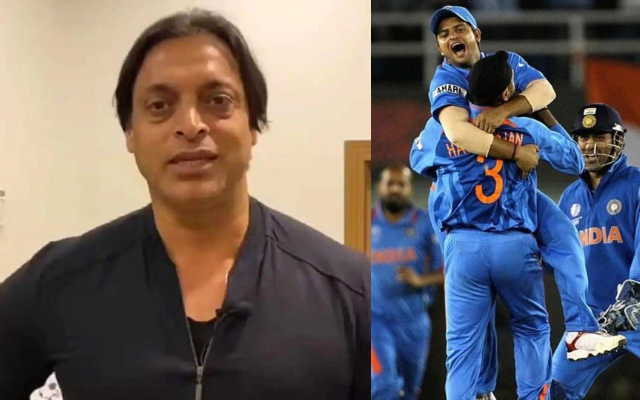 Even after ten years have passed since India’s victory in the World Cup, the players and spectators alike still have vivid recollections of the momentous occasion. In 2011, India was the team that won the coveted World Cup Trophy. Shoaib Akhtar, a former Pakistani speedster, had a nightmarish ending to the tournament, and he acknowledged that the memories of the 2011 World Cup still torture him.

After a long and torturous wait of 28 years, the Indian team, led by the mercurial MS Dhoni, was finally able to win the trophy. The triumph of the Men in Blue against their bitter rivals, Pakistan, in the tournament’s semi-finals made the historic tournament even more unforgettable. The event was won by the Men in Blue when they prevailed over Sri Lanka.

During the decisive semi-final match, which took place at the Mohali stadium and was attended by the Prime Ministers of both India and Pakistan, Dhoni’s team played Pakistan. Shoaib Akthar, a prominent player for Pakistan, was not selected for the starting eleven since it was determined that he was unable to participate in the game due to injury.

Akthar referred to the decision to leave him off the squad as “unfair,” since he wanted not only to win the match but also to go as far as possible in the tournament and see the Pakistani flag hosted at the Wankhede after the final. However, the decision was made to leave him off the team. According to the former pacer, India was under a great deal of pressure to do well because of the expectations of the home audience.

“The memory of Mohali, the semi-final of the 2011 World Cup, continues to torment me. They ought to have played me, and they ought to have done so. It was a very unfair situation for the management of the team. I was aware that I only had two more matches to play, and I had the hope that Pakistan’s flag would be flying high at Wankhede. I was aware that India was coming under a significant amount of pressure. We were the underdogs since the whole country and the media were looking up to the squad as though they were going to win. I think that we shouldn’t have accepted the pressure,” Shoaib Akhtar said to Sportskeeda.

If Sachin and Sehwag had been taken out of the game early, India would have been doomed to fail: Shoaib Akhtar

India scored 260-9 thanks in large part to Sachin Tendulkar’s brilliant 85 not out. The Pakistani squad got off to a strong start in their pursuit of the target, but they fell short in the key phases and were bowled out for 231. Akhtar recounted watching the excruciating defeat from the dugout and claimed that, in his wrath, he broke a few objects in the locker room.

The former fast bowler feels that he might have changed the game if he had been able to get Sachin and Virender Sehwag out inside the first ten overs of the semi-final match.

“I would not have given Sachin and Sehwag any consideration. If Sachin and Sehwag had been taken out of the game early, India would have been doomed. I felt profound anguish. Attend the match for five or six hours and see Pakistan lose while you’re in the dugout. I am not the kind of person who gets emotional and starts crying, but I am the type of person who is always breaking stuff. And I did shatter a few things in the dressing room because I was so unhappy, disappointed, and upset, and the whole country was too,” Akhtar continued.

‘There Are Ocassions When I Actively Look Forward To’- Sunil Gavaskar Reveals One Thing That He Is Looking Forward For Hardik Pandya To Do
At $12m per match, IPL set to be 2nd most lucrative sports league in the world