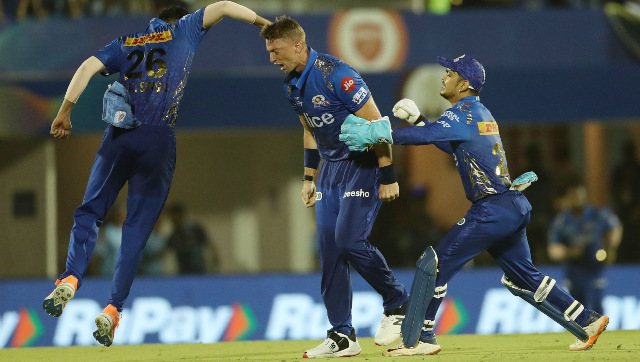 Daniel Sams bowled a superb last over to take bottom-placed Mumbai Indians home against table-toppers Gujarat Titans in their fixture on Friday. GT needed nine to win off the final over in pursuit of MI’s 177-run target, but Sams restricted them to three runs only. His game-changing over ensured MI defeated GT by 6 runs.

David Miller and Rahul Tewatia were the two batter at the crease in the 20th over, both architects of high-octane chases in the past. Miller was batting on 18(12), and had just whacked Jasprit Bumrah over mid-wicket for a 93-m six in the penultimate over. When Sams was tossed the ball, the South African was on strike and looked poised to take his side home as he has on multiple occasions this season.

But the Australian’s clever variation between slow and low, wide deliveries kept the batters guessing. Miller could only take a single off the first ball, and Tewatia tried to swipe next ball at a delivery that landed just inside the tramline. With eight needed off four now, Tewatia was under pressure and was runout, bat on the line, trying to take a dangerous but necessary single.

The next batter in, Rashid Khan took a single after getting a massive top-edge, which left Miller on strike with GT needing 6 off 2. But Sams stuck to his winning formula; he fired the next two deliveries in slow, wide and full and Miller ended up swishing at fresh air. It’s safe to say Daniel Sams scripted a comeback for the ages after early in the tournament, he was hit for 35 runs in a single over by Pat Cummins.

“It is awesome that we got over the line, it went back and forward. Must have been great for the fans to watch. 9 off 6 made me feel I have nothing to lose and the odds are in the batter’s favour,” Sams told Star Sports. “I got a few wide balls in the tramline and managed to execute it well. My intent was to stick to the best balls I could bowl, the slower one is the ball I go back to and it paid off.”

“We did not have the start we wanted, after the 8 losses, we looked it as a mini-IPL with 6 games. We are trying to show what we can do and were able to pull it off which helps our confidence,” he said.

This is MI’s second win of the season. They are still at the bottom of the table with four points, but now have back-to-back victories after eight consecutive defeats. The Titans, on the other hand are still first on the table, but have lost their last two matches.

‘He told me that’s not how cricket is played’ – Warner to Rovman Powell on missing out on a hundred
‘Took PBKS a while, but thank goodness we’re finally getting to see Bairstow madness’ – Twitter hails Jonny Bairstow return to form