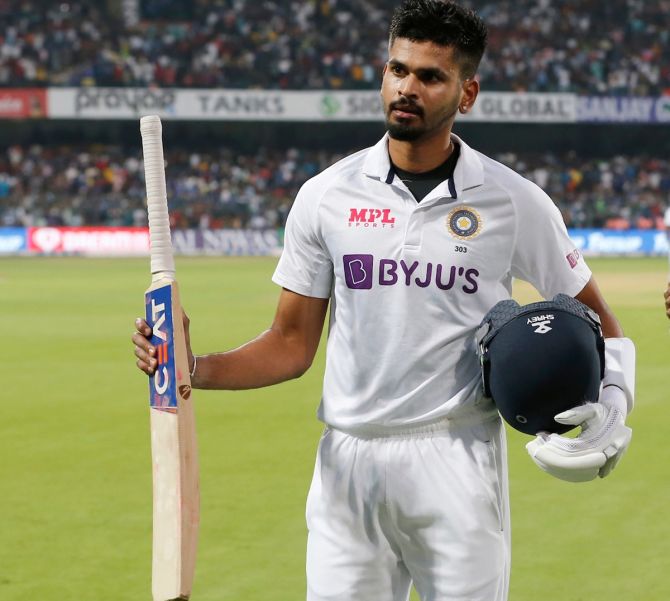 Shreyas Iyer is the man of the moment after India’s 2-0 series victory over Sri Lanka. After an excellent run in the T20Is against West Indies and Sri Lanka, Iyer carried his form over into red-ball cricket. He scored twin fifties in the day-night Test at Chinnaswamy Stadium, batting with confidence and poise against the pink ball.

Featured on Ashwin’s talk show ‘DRS with Ashwin’ last year, Iyer opened up about wanting to play Test cricket. He was part of the Test squad that hosted Australia in 2017, but didn’t play any matches.

At the time of talking to Ashwin, Iyer hadn’t yet made his Test debut. He said, “Obviously, my first priority was to play Test cricket when I first started playing cricket. My first-class record has been really amazing so far. I have always played attacking cricket in domestic, but, yeah, I haven’t got the chance.”

Iyer reflects on being a substitute fielder back in 2017

Back then, he’d taken the field only on a single occasion in Test cricket. Iyer talked about the Australia tour of India in 2017, when he was drafted into the squad but didn’t get a chance to play. In the fourth test at Dharamsala, he was called on as a subsitute fielder, replacing Virat Kohli was who sitting out with a shoulder issue. However Iyer still managed to make an impact, running out Steve O’Keefe with a sharp throw from square leg.

“I have got one run-out. I didn’t make my debut but I still got one run-out. That’s an achievement for me,” Iyer said. He continued, “this was against Australia in Dharamsala. Virat (Kohli) had a shoulder issue and I came in as a replacement (fielder).”

Fast forward to November 2021, when he was finally drafted into the team for New Zealand series, replacing Virat Kohli and batting at number five. Iyer’s dream debut saw him score 105 and 65 in the Kanpur Test, and he has accumulated 388 runs averaging 55.42 just after four matches. Ironically, not even Iyer himself could have predicted such a sparkling start to his Test career.