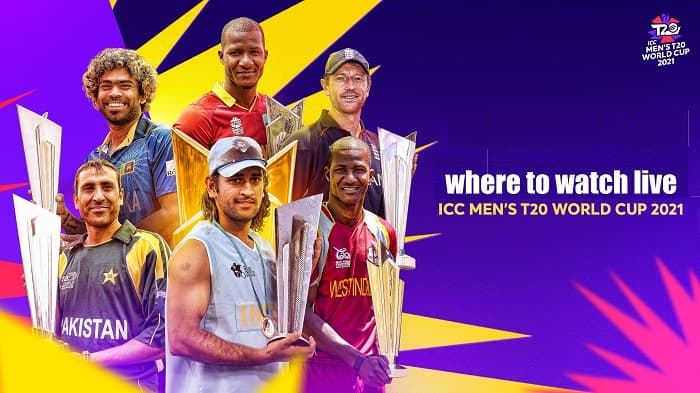 Cricket is a sport that is enjoyed worldwide. ICC T20 World Cup is one of the mega cricket tournaments, where 16 qualified teams participate each year to win the trophy. This year marks the 7th edition of the Men’s ICC World Cup to be held in UAE and Oman. The entire series will be held between 17th October – 14th November 2021. Check ICC T20 World Cup 2021 Live Telecast In India, TV Channels Worldwide.

ICC T2o World Cup will feature a total of 42 matches. The entire series will be divided into 3 stages-Round 1, Super 12, and Knockouts. Before the knockout stage, there will be a series of 30 matches between the top 12 twelve teams. So take a look at the Live Telecast In India, TV Channels Worldwide, Schedule, and teams list.

The fanbase for Cricket in India is huge. Every year the fondness for the sport increases amongst the young crowd. The executive broadcasters of ICC have decided to provide live coverage of the entire series in India through Star Sports Network. Star Sports is a global broadcasting network that will cover the live footage of ICC T20 World 2021 across 160 countries. All Matches are streamed live in India and its subcontinent on Disney + Hotstar digital platform (Website, App) with a premium subscription.

Since cricket fans worldwide will waiting to know where their live matches will be telecasted, here is an entire list that will be easier to find the channel for the respective region or country you will be viewing at. So take a look at the TV channel list worldwide below,

ICC T20 World Cup will have a total of 42 matches including round 1 between 8 countries. Later on, the top four teams that win will proceed towards the Super 12, where the top 12 teams will be competing for each other into 2 equal groups. This is followed by 3 knockouts, semi-finals, and then finals. The ICC T20 World Cup 2021 has been divided into three stages.

The Top 8 ranking teams in the T20I and the top 4 teams of round 1 will be competing in the Super 12. The teams will be divided into 2 equal group of 6 each. Here, take a look at the schedule.

The knockouts will commence from 10th November 2021. The 4 winning teams of Super 12 will battle it out to the ICC T20 World Cup Finals.

There will be 16 teams playing in the ICC T20 World Cup series. The entire series will be held in Oman And UAE. Here is the entire team list of ICC World Cup 2021.