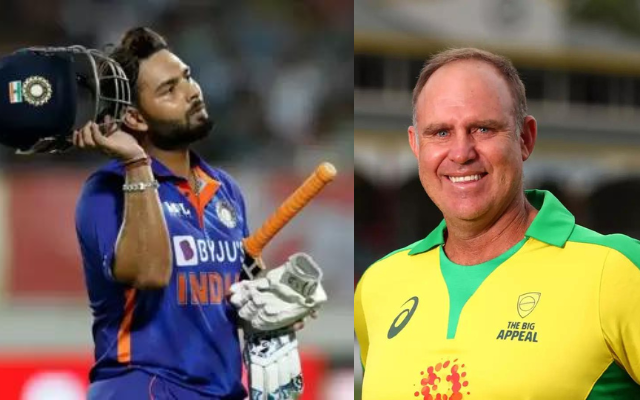 Matthew Hayden, a former Australian opener, was critical of Team India’s player selection for the inaugural Twenty20 international match, which took place in Mohali. Rishabh Pant should have been selected for the side, according to Hayden, who was speaking after the toss was completed. Pant should be given support even if it means giving him more time, as the former towering batsman believes that Pant is the future of the sport and that if he were a selector, he would have chosen Pant every time.

The Men in Blue are now attempting to resolve the controversy surrounding Pant vs Dinesh Karthik. Pant was given the nod to bat in the latter games of the Asia Cup when Ravindra Jadeja was sidelined with an injury. Karthik was the player who started the Asia Cup match, just as he has been playing in the current series. However, his efforts did not inspire the squad to the point where they were willing to keep Karthik, who is the team’s designated finisher, out of the lineup.

What did Matthew Hayden say about Rishabh Pant?

Before the start of the match, Hayden gave an interview to the host broadcaster Star, in which he remarked, “Rishabh Pant would be picked in every side if I was the selector. He is just the future. He needs to be backed and needs time. Even if it’s through runs or form, he should be there in my opinion. He is a superior player in pretty much every way and aspect.”

Hayden shared his delight for Josh Inglis when talking about the Australian side while Tim David was making his first appearance for the Men in Yellow. Hayden compared Inglis, who bats right-handed, to David Warner, who bats left-handed, since both players are extremely excellent and powerful players.

“They are a weakened team, but they have to dig deep if they want to win. We need to look ahead to the next thing on the schedule. Josh Inglis is a very young and exciting player. He’s so much like David Warner that they could almost be twins. He is a right-handed David Warner. He cuts, pulls, and lays back, and when the ball comes to him, he hits it through the on-side. He is also an excellent strong player,” he said.

Although Inglis usually opens the batting, on this occasion he came in at number five and hammered three fours. Cameron Green, who opened the batting for Australia instead, hit 61 runs off of only 30 balls, helping the visitors succeed with both of their strategies.

Mr Hayden, We Indians are different.
We only see Averages and SR 140 that's all. Hum koi fark nahi ki match jette ya haare.
Unlike your country, where you pick players on impact they create , We look at fifties and hundreds.
I guess that is y, you won 6 WCs and we 2.

this team is done and dusted, you will see new coach and captain after this wc.

One staright question to Mathew Hayden, if your nation has the same guy then you guys never play him for 59T20I.And Indian team played him so it's immeturity, politics and those big guys in India only focus on Economy in every situation they go for that's very disappointment.

Absolutely on spot! Rishabh will be in my team too, he is an ex factor I don’t mind dropping anyone else for him, since he is a performer on big stage and formats doesn’t matter at all 🙂

‘No. 18 jersey is made to break records’-Twitter reacts as Smriti Mandhana is the 3rd fastest in the world to complete 3,000 runs in women ODIs
India vs England: “Well played Naari Shakti”, Twitter ecstatic as Team India trumps England to clinch a historic ODI series