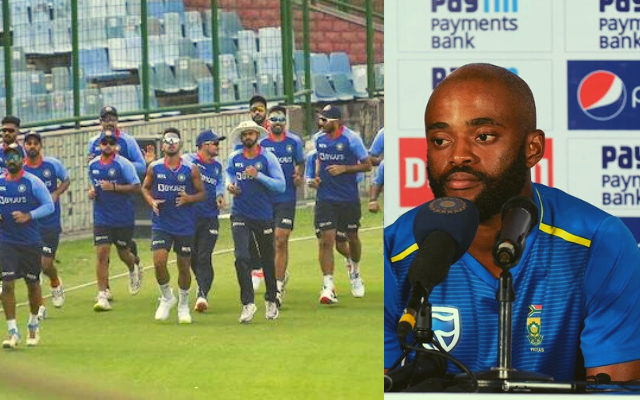 Beginning on June 9th, the Indian squad will play five Twenty20 International matches at home against the South African side. Temba Bavuma, the captain of South Africa’s squad, said that due to the present pace attack of the Indian side, they have had to reevaluate their strategies in preparation for their visit.

The Indian team that traveled to the rainbow country was quite different from the one that the Proteas will face in the match. The Indian team, which is now without the services of Rohit Sharma, Virat Kohli, Jasprit Bumrah, and Mohammed Shami, suffered a significant setback earlier when skipper KL Rahul and chinaman Kuldeep Yadav were ruled out of the series on June 8.

In Rahul’s absence due to injury, Rishabh Pant will take over as captain of the team. Gujarat Titans captain Hardik Pandya will be the vice-captain. Umran Malik and Arshdeep Singh are two new players that the Indian squad will be fielding in this series. Both players will make their debuts for the Indian team. The whole world of cricket took notice of Umran when he stunned some of the best batsmen in the world during the IPL 2022 tournament with his high-pace deliveries. In the absence of seasoned competitors like Bumrah and Shami, another one of the fast bowlers who will step up to the plate and assume leadership responsibilities is Avesh Khan.

In the days leading up to the first match of the series, which will take place in New Delhi, Bavuma said that they have altered some of their strategies and are now ready to take on India’s fast bowlers as well as their outstanding spinners.

“It has most obviously altered the way that we prepare since they have their fast bowlers in addition to their spinners. In terms of preparation, the emphasis has not only been on the spin but also to make sure that we cover our bases from a fast bowling point of view. We want to make sure that we have all of our bases covered,” Temba Bavuma said in the pre-match press conference.

Both India and South Africa are looking forward to a thrilling series.

The South African captain also recalled his team’s triumph against India earlier this year in South Africa. He emphasized that a large number of fresh players would be driven to perform well to establish themselves in the Indian squad. The captain believes that this will be a challenging competition for his squad as well as an intriguing series for both of their opponents.

“This is going to be a really intriguing series for both India and South Africa. There are several younger, newer faces within their squad. Players who have a lot to clear up, guys who want to make a strong case for where they belong in the Indian squad. We won’t be expecting everything to be simple, and we aren’t assuming that everything is going to play out the same way as it did in South Africa,” Bavuma said further.

On June 9, the first game of the series will be played in the Arun Jaitley Stadium, which is located in Delhi, under the sweltering summer heat.