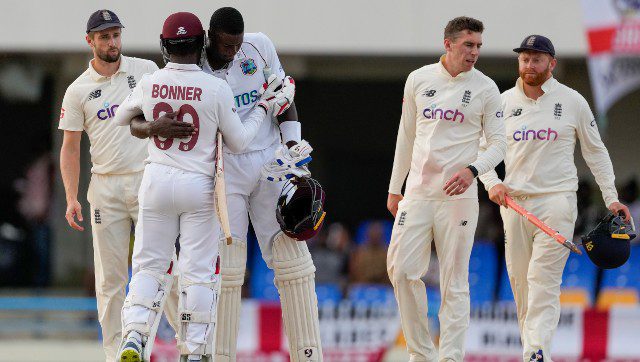 West-Indies all-rounder Jason Holder expressed his disapproval of England’s conduct, during the fourth innings of the Antigua Test between the two sides. After declaring on day five, England set them a total of 285 for the fourth innings

The Windies openers Kraigg Brathwaite and John Campbell started strongly, adding a 59-run partnership. Then they suffered a collapse, losing four wickets for only eight runs to be reduced to 67 for 4. Campbell holed out to mid-off, and Shamarh Brooks and Jermaine Blackwood could not find answers to Jack Leach’s probing spell.

Nkrumah Bonner and Jason Holder were left to pick up the pieces, and managed to secure the West Indies a draw from their precarious position. Their slow-burn sixth wicket partnership added 85 runs in 215 balls. But England refused to let up, despite the stable pair at the crease, and with none of their bowlers managing any more breakthroughs. Yet, they still played for the win, adamant against accepting the draw until the very last over of the day.

Earlier, the Windies all-rounder Carlos Brathwaite had also criticized England for refusing the draw, calling it ‘disrespectful’ to take the game up to the last hour. “If I were Kraigg Brathwaite or any of the other senior players in that dressing room I would have found it a bit disrespectful that in the last hour,” he said, “with two set batsmen batting the way that they were and the pitch offering nothing England felt as though they could get six wickets in the last 10 overs going up until five balls left.

“I thought they went on way too long,” Holder told Sportsmail on Tuesday. “I know what Carlos (Brathwaite) said and it would be wrong to say I disagree. When we went into the last hour I told Nkrumah Bonner that if we batted for five more overs they would probably call it (shake hands to signal a draw). So I was really surprised they went on.”

Holder hopes the Windies can return the favour in their next meeting at Bridgetown, mentioning that some positives came out of the situation. “In a sense I didn’t mind because it gave the English team more overs in their legs. Stokesey (Ben Stokes) was running in and putting in a really big effort,” he said. “I look at the positives in any situation and the positive for me was that the English lads were on their feet and had to bowl a lot longer. They had to toil a lot longer. It would be good if we could put them back in the field for that length of time again now.”

“We are up for the challenge. You saw the way Nkrumah batted in the entire (first) Test. His game is built around time spent at the wicket and if they want to stay in the field for excessive amounts of time that’s up to them. We’ve just got to focus on what we need to do,” added Holder.