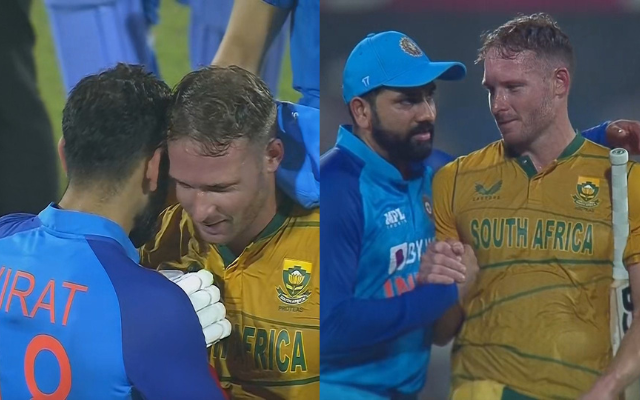 Rohit Sharma and Co have pulled off yet another masterclass in the shortest format of the game. The Men in Blue have beaten Australia of late as they won the series by 2-1.

In the wake of sensational performance over the Aussies, Indians carried the same momentum into the the T20I series against the South African national cricket team.

The second T20I between Proteas and India kept the fans at the edge of their seats at Barsapara Cricket Stadium, Guwahati. Batting first, India posted a colossal total of 237/3 in their quota of 20 overs.

Suryakumar Yadav was the pick of the batsmen for Team India as he scored 61 off just 22 balls. He hammered 5 boundaries and 5 hits over the fence.

On the other side of the coin, Proteas ended up scoring 221/3 in their quota of 20 overs. David Miller played a gem of a knock as he scored an unbeaten 106 off 47 balls.

The southpaw who scored most runs for Proteas in Twenty20 Internationals scored a magnificent century. Miller smashed as many as 8 fours and 7 sixes at a strike-rate of 225.53.

Appreciation all around for David Miller. 👏👏

But it's #TeamIndia who win the second #INDvSA T20I to take an unassailable lead in the series. 🙌 🙌

46 ball hundred for David Miller, the best in the business for South Africa in T20I. What a knock. pic.twitter.com/CX3w4gXwdo

Hundred by David Miller – what a stupendous knock this has been by Miller. Just world class hitting throughout the innings, under such pressure he put on a show. pic.twitter.com/VS7cbuK3lQ

A T20 series win for the first time against South Africa.. Congratulations to @imro45 and Team India. Congratulations also to David Miller for an entertaining hundred today. ♥️🙏🏽 pic.twitter.com/4cNC0jKEB9

What an Innings by #DavidMiller !
105 off 46 balls
Unbelievable!!!! #INDvSA pic.twitter.com/tjnyN2Jfw7

Arshdeep Singh concedes 26 runs from the 19th over. The penultimate over worry for India continues.

Most runs conceded by an Indian bowler in a T20I: