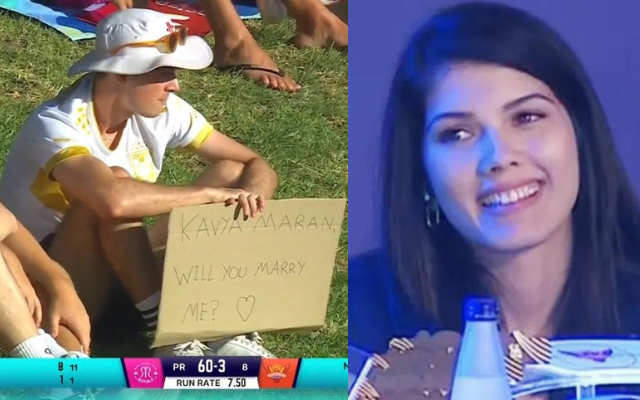 T20 cricket is seen as the future, the fans are getting the real dosage of the most entertaining format in many different ways. Among the T20 franchise cricket leagues, Indian Premier League is the most-watched tournament in the world, which has completed as many as 15 editions since its inception in 2008.

Meanwhile, South Africa’s very own T20 competition, “SA20” made its debut in 2023. The inaugural edition did get much-needed attention amid the increasing popularity of T20 leagues across the globe. It is also good to see the fans turning up in numbers in South Africa to watch the T20 league.

The cameraman zoomed in on the fan who was holding the cardboard with a caption written as “Kavya Maran, will you marry me?” along with a heart emoji. The picture of the same went viral on social media portals. For the unversed, Kavya Maran is the owner of Sunrisers Eastern Cape and is also the co-owner of Sunrisers Hyderabad.

Meanwhile, the young businessman is yet to respond or react to the marriage proposal. The busy entrepreneur was recently seen in the IPL 2023 mini-auction which took place in Kochi on December 23. Kavya Maran will be expecting Sunrisers Hyderabad to perform well in the sixteenth edition of the Indian Premier League.

Now sport's stadium has become an proposing venue for everyone…….

She is now international crush 😂