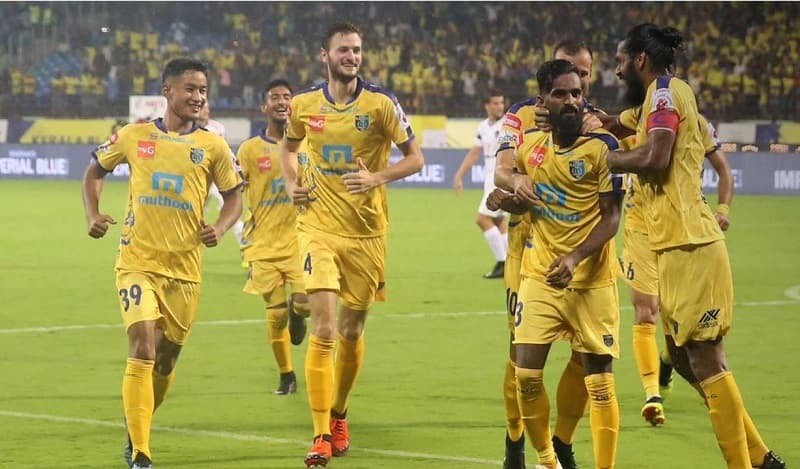 Kerala blaster football club is an Indian football club representing Kerala, Kochi. That competes in India for the Indian super league. the club was founded in 2014, The club played its official match on 13 October 2014. Kerala one of the main symbols is an elephant and the club crest is designed around that. Check Kerala Blasters Squad for the 2021-22 Indian Super League Season.

Here is your Blasters squad for the 2021/22 Hero @IndSuperLeague season! ⤵️#YennumYellow

Word to the wise: don’t mess with these lads! 👊#YennumYellow pic.twitter.com/BtEfpjfVEu

After the disappointing finish of the previous season in 10 places, Kerala blaster started its preseason preparation under the head coach /manager Ivan Vukomanovic. played many friendly matches against Indian navy, Kerala united, Jammu and Kashmir Xll many of the games in Goa for the preparation of Indian super league.

They won most of the preseason matches including against Odisha FC by 2-1 goals were scored by Alvaro Vazquez and Prashant K. considering their Training facility in panoply Nagar, Kochi there will be a huge come back in this season of Indian super league. Kerala blaster had a perfect preseason preparation with head coach Ivan Vukomanovic.

Kerala blaster finished in 10th place in the previous season with 20 played matches 3 wins 8 draws and 9 losses with a total of 17 points. Sandesh Jhingan favorite defender of all time left the team with mutual consent after completing six years of associations with the blaster. After the great impact blaster decided to rely upon the young player and finished the season at 10th position.

Kerala blaster finished in 7th place in Indian super league season 2019-2020 with 18 total matches played 4 wins 7 draws and 7 loss scoring a total of 19 points. Kerala blaster made the start of the season with a new manager Eelco Schattorie. The club also decided to change their foreign players, Sandesh Jhingan the captain was out of cation for many games due to the first game injury.

Kerala blaster finished in 9th place in Indian super league season 2018-2019 with 18 total matches played 2 wins 9 draws and 7 loss scoring a total of 15 points. Kerala blaster had their worst seasons ever they were able to only win 2 points. They were eliminated from the Super Cup in the qualifying round of the tournament.