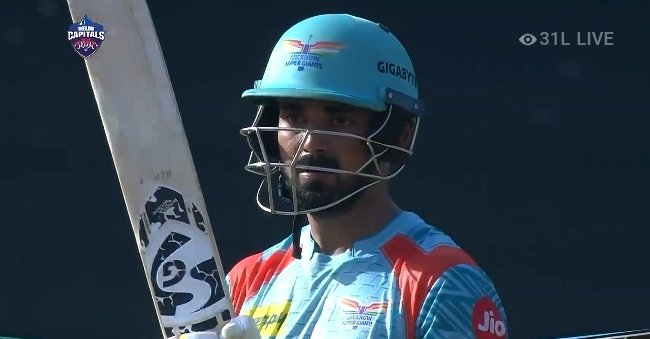 KL Rahul has turned in another excellent performance for Lucknow Super Giants during Delhi Capitals game against them on Sunday afternoon. He scored 77 off 51 balls at a strikerate of 150, hitting four fours and five sixes along the way. The skipper’s innings led LSG to a total of 195, which they successfully defended to clinch a victory over DC by 7 runs.

Quinton de Kock led the charge for LSG during the powerplay, allowing Rahul to keep his head down and acuumulate runs. He made 18 off 15 balls during the first six overs, but before de Kock was dismissed in the fourth over he had already added 23 off 13 balls. Rahul targeted Lalit Yadav for a four and a six, and LSG ended with a healthy powerplay score of 57.

Deepak Hooda was dismissed in the fourteenth over after scoring 52 off 34 balls, having stitched together a 95-run stand with Rahul. Stoinis joined Rahul at the crease, and the skipper kept going with a steady stream of boundaries. Rahul brought up his 50 off 35 balls at the end of the thirteenth over. Shardul Thakur was the one to finally dismiss on him, bowling a wide length delivery that Rahul couldn’t middle. The batter swung in a huge arc, but the ball was caught on the point boundary by Lalit Yadav.

With 451 runs from 10 innings, Rahul is now the second highest run-scorer of the tournament, averaging 56 while batting at a strikrate of 145. Only Jos Buttler is ahead, with an unreal 566 runs from nine games. He has two centuries and two half-centuries so far, both tons occurring against the struggling Mumbai Indians. His highest score of the season was his undefeated 103 off 62 balls against Mumbai.

Fair to say that KL Rahul is the best all-format batsman at the moment….

KL Rahul continues to make his name in IPL records in batting. 👌

KL Rahul is the closest anyone can ever get to ABD, ability-wise.

The ball striking from Jos Butler and KL Rahul in this seasons IPL has been exhilarating. Both have been flawless, they have taken T20 batting to another level now it’s for the rest to step up to their level

‘If MS Dhoni is playing in any team, he has to lead’ – Ravindra Jadeja gives up CSK captaincy, Twitter reacts
‘MS Dhoni’s post-match interviews are a form of therapy’ – relieved CSK fans rejoice on Twitter after win